Tradition By Hand: A Book of Russian Folk Art 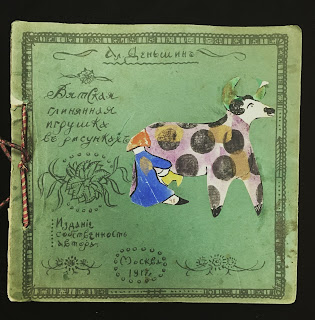 Folk art, and artistic style itself, bends over time to the weight of cultural change, its authenticity eroding until a new style rises up to take its place. It takes deep traditional roots and regional resilience for a method to withstand such pressures; such is the case with Russian Dymkovo toys. The small figurines were first explicitly mentioned in 1811, but were noted as key parts of a celebration to commemorate a battle some four hundred years prior. Made from clay and river sand and whitewashed with chalk diluted in milk, the toys take on grotesque, almost amoebic shapes. The limbs of men and women extend only vaguely out from their ill-defined torsos, and the legs of cows, deer, and rams are often only half-realized curves protruding from their bodies. All are decorated in geometric patterns in bright colors – a duck may be covered in green dots, a ram’s horns may be a brilliant orange, a woman’s skirt checked in blue and yellow. To this is sometimes added gold leaf, giving the rustic figures a strange richness. They depict not only real creatures, but also fanciful ones, such as horses with two heads or winged beasts. 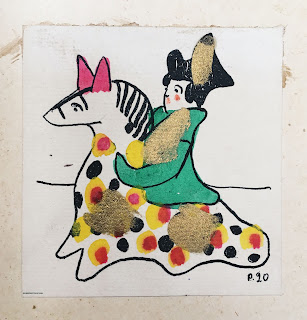 The 1811 mention of the Dymkovo toys occurs in the writing of Major General Khitrovo, who had been sent into exile to the region of Vytaka. There, at the village of Khlynov, he learned of the legend of the Khlynovo massacre, an event unconfirmed but seared into the collective memory of the town. Each year the villagers gathered to commemorate the bloodshed, and here Khitrovo noted that brightly colored and gilded clay dolls were sold to honor the widows left after the battle. The gathering, called Svistoplyaska, functioned not only as a remembrance of the past, but also as a festival to celebrate spring fertility. The festival required participants to whistle in the new season with pennywhistles, and this ritual was performed by women. Women also were the only ones who created the Dymkovo toys, thus asserting themselves as the heralds of springtime and the bearers of renewal and continuity in the land and among the people. 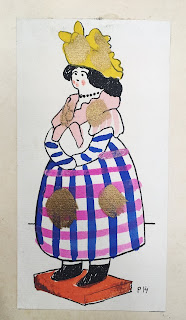 As time passed, the toys became more sophisticated. Ladies might bear parasols or wear bonnets, men might sport top hats and cloaks, after the fashions of city-dwellers. Toys might display multiple figures – a woman riding a horse, or a couple holding hands – and separate toys might be arranged into tableaux. However, by the beginning of the twentieth century, mass-manufactured porcelain and plaster figurines were threatening the traditional handmade crafts. The Svistoplyaska festival still existed, although now known as the Svistunya, but had been reduced to a children’s party. However, in the Soviet era, the old ways were revived; in 1939, masters of the Dymkovo craft were commissioned to create a panneau for that year’s agricultural exhibition. Now, students may travel to the Vytaka (or Kirov) region, where the Kirov Artist Union closely monitors the use of traditional methods to create the toys. Though the field is still small, it trudges onward in the hands of eager young artists who learn the old ways from village women. 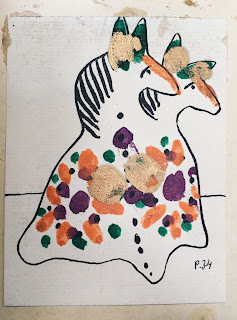 The revival of the tradition of the Dymkovo toys relied not just on the few old women who exhibited their handiwork at the agricultural exhibition; it also owes its success in part to Alexei Denshin (1893-1948), a Moscow artist fascinated with the craft. Denshin published a series of monographs on the toys, and in his later career taught at the Vytaka Art College. His interest in the tradition began early on, as exemplified in this 1917 volume of hand-colored drawings that reproduced original figurines. In them, Denshin well-represents the abstractness of the toys, and his colors glint off the pages as they would off the originals. The volume has a stated limitation of three hundred copies, but the amount of work required to produce it – the drawings are hand-done and glued to each page, the introductory text has been lithographed in sepia from Denshin’s own calligraphy, the book itself is carefully stab-bound with string – suggests that the actual number published is not so high. It retains its original board slipcase, which had hand-done ornamentation in red and black. The volume itself is a work of art, a book of careful construction and whimsical artistic style, but its significance lies in its testament as a man’s consideration of a woman’s art, its recognition of the resiliency of cultural custom, and its celebration of the rural arts that speak to the soul of the Russian countryside.