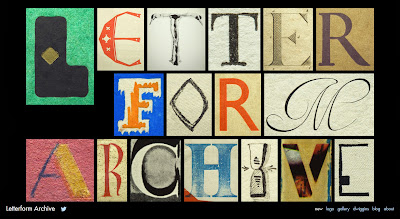 Our friend Rob Saunders has been collecting works related to calligraphy and typography for over 35 years, but he is now working on an interesting project to put high-resolution images of letterforms online to share with the world. The website is Letterform Archive, and here is an excerpt from the website's raison d'etre:


We want to raise the bar in imaging graphic design.

How? By capturing the tactile aesthetics of the object, not only digitizing what’s on the surface. Scanning and traditional copy photography won’t do, because they don’t capture texture well. What’s needed is high resolution photography of original works with lighting carefully tuned to capture tactility.

Our goals include:
Sufficient resolution so that you can zoom in to see detail,
Appropriate capture of surface texture,
Full spreads and full margins with edges showing so you see the whole design, and
Consistent color which captures even the subtle variations of “white” papers.

The website has a section devoted to W. A. Dwiggins, one of our favorite designers, and they are constantly adding new content to the gallery. They also have a blog and are on Twitter under @LettArc.

We're looking forward to seeing what new letterforms appear in the future, as they seem to span time, space, and genre, and we congratulate Rob for putting together this new graphic design resource.

Posted by Shannon at 1:34 PM No comments: 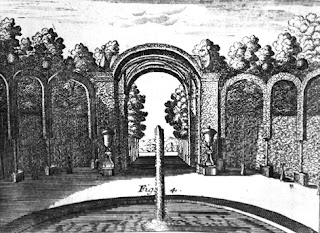 For this late-summer offering, we have pulled together nearly forty items from across our specialty areas that we are offering at 50% of their list prices. A small group of miniature can be found together at the very end of the list. As with previous sale catalogues, the books are posted at their regular price, and the discount will be applied at checkout using the promotional code "2013sale".

We hope you find something you have long desired, made even more so by this special offer. 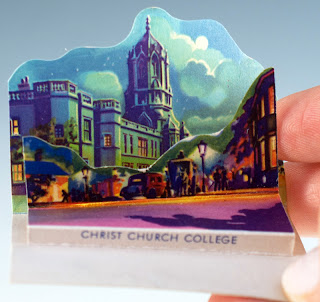 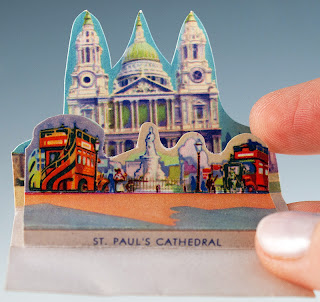 As aficionados of both miniature and movable books, we were drawn to these small, pop-up cigarette cards depicting famous British landmarks. Twenty-four different cards were distributed with packages of Herbert Tareyton cigarettes as a promotional premium, encouraging the purchaser to collect them all. Among the landmarks included are Buckingham Palace, Canterbury Cathedral, Covent Garden Theatre, Scotland Yard, Windsor Castle, and the Houses of Parliament. Although Herbert Tareyton was an American cigarette brand, their marketing image and mascot, a dapper, monocle-wearing spokesman known as "Dude," was meant to seem British and aristocratic. The subject matter of these cigarette cards served to enhance this association. 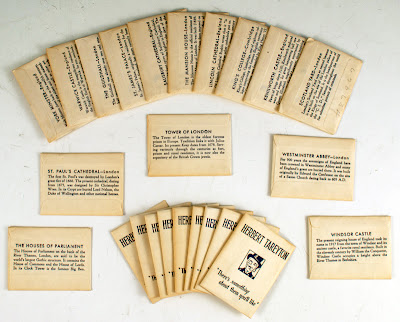 Cigarette packages of the 19th century commonly included a small cardboard insert to stiffen the container. Inspired by printed trade cards and the advent of chromolithography in the late 1870s, James Buchanan Duke, of W. Duke & Sons in Durham, was the first to see the advertising potential of these cards. On one side of the cards, he printed the brand information, and on the other side was an image, designed to be part of a collectible series. These sets came to include a diverse variety of subjects, including actors and actresses, sports stars, landmarks, and plants and animals. Most cigarette cards were inexpensively printed, but a few were presented in more deluxe formats. Some were actual silver gelatin photographs, while others were printed silk fabric or had pop-up elements, such as this set. 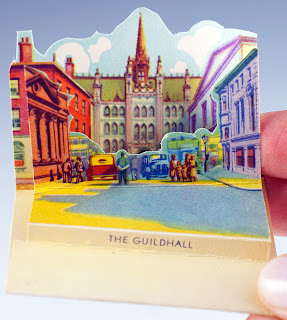 Published in 1939, during the height of cigarette card popularity, the cards included in this set are housed within their original envelopes, which are printed with the Tareyton name, mascot, and slogan on one side, and a description of the landmark on the reverse. The pop-up images show the famous buildings in the background with action scenes in the landscape's foreground. All are chromolithographed using bright colors.

The slogan for Herbert Tareyton cigarettes was "There's something about them you'll like," and the same is true of these pop-up cards. With their eye-catching colors, recognizable subject locations, and miniature size, they have something appealing for everyone. 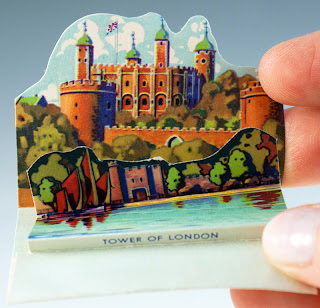 For more information about cigarette cards, and to view an extensive online exhibit, please visit the links below, and as always, thank you for reading.

http://library.duke.edu/rubenstein/scriptorium/eaa/tobacco.html
Posted by Meredith at 11:01 AM No comments: