Bromer Booksellers will be exhibiting at the 39th Annual Albany Antiquarian Book & Ephemera Fair in Albany, NY this Sunday, October 27th. Please see below for more details about the fair, and we hope to see you there!

"Believe me sincerely yours, C. Ricketts." Part I 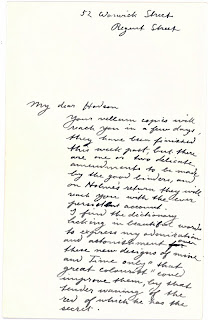 "I find the dictionary lacking in beautiful words to express my admiration and astonishment over these new designs of mine and Time only 'that great colourist' could improve them, by that tender warming of the red of which he has the secret." - Charles Ricketts to Laurence Hodson, postmarked September 1, 1898 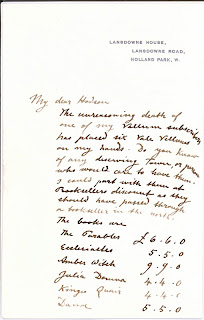 Bromer Booksellers recently acquired a group of letters from artist and Vale Press founder Charles Ricketts to prominent private press collector and patron Laurence Hodson. These span the years from 1897 to 1905, and they offer a glimpse into a business relationship that was anchored by mutual respect and shared interests. Our colleague Paul van Capelleveen has highlighted two of the letters on his blog, Charles Ricketts and Charles Shannon, and you can go here and here to read about them. However, we wanted to give a bit of background on the sender and recipient, while quoting heavily from the letters, which show Ricketts' strong opinions and great wit. So, this is the first in a two part series about the letters of Charles Ricketts to Laurence Hodson, and this post will focus on Ricketts and his Vale Press.


"I have been binding some Morris books in rose gardens, forests, and cathedral front doors for the good Downing of Birmingham. I feel after all this exercise of design and gold stamps that the books should belong to me and not leave Warwick Street, or rather Richmond." - C. Ricketts to L. Hodson, Sept. 1, 1898

Charles Ricketts was born in Geneva in 1866. When he was 16, he apprenticed with a wood engraver, which is where he met Charles Shannon, his lifelong partner. Ricketts and Shannon lived, worked, and traveled together for almost 50 years, until Ricketts' death in 1931. When they completed their apprenticeships, Ricketts and Shannon took over the lease of a house in Chelsea, and Ricketts worked as a designer and illustrator to earn money, while Shannon worked on his painting technique.


"We have just returned from the sea to recoup in balmy London, how I dislike being away from one's own den, and what cooking one has to put up with outside London! This is the seventh time we return from Broadstairs vowing we never will return." - C. Ricketts to L. Hodson, Sept. 20, 1904

Their house, The Vale, had been previously leased by James McNeil Whistler, and when Ricketts and Shannon founded the literary art journal The Dial in 1889, they used "many of Whistler's methods and materials and, like his work...[had it] printed commercially by the Ballantyne Press" (Cave 114). According to Roderick Cave, "the first number [of The Dial] so impressed Oscar Wilde that he came to The Vale to meet the two and is said to have begged them not to bring out a second number, as 'all perfect things should be unique'" (114). Nevertheless, The Dial appeared in four more issues sporadically between 1892 and 1897.


In 1894, Ricketts began another endeavor, his Vale Press, named after their home, The Vale, and backed financially by Llewellyn Hacon. Ricketts and Shannon had been experimenting for a few years on creating wood-engraved illustrations and initials together, producing an edition of Daphnis and Chloe, which was printed by the Ballantyne Press in 1893. 1894's Hero and Leander was the first book to bear the Vale Press monogram and watermark, though it was not until The Early Poems of John Milton, published in 1896, that the Press name appeared in a book.


"Shannon and the brown paper have at last come into conjunction and you will receive by parcels post the derelict vellums. I should be happy if you could make it convenient to pay for these rather shortly, as our finances are at the lowest possible ebb, we have bought the Piero di Cosimo and are reduced to theoretic banking accounts and the glorious arrogance of possession." - C. Ricketts to L. Hodson, Oct. 24, 1904

Under the Vale Press imprint, Ricketts went on to design and publish 46 works until the Press's closure in 1904. Ricketts became known as one of the "masters of the revival of great printing" (Ransom 36). Ricketts never owned his own printing press (a handpress and pressman were reserved exclusively for him at the Ballantyne Press), and distribution of the books was done by John Lane, but he designed everything about the books, from the type and paper, to the initials, borders, and illustrations.


Though influenced by William Morris and the Kelmscott Press, Ricketts' work was more in line with the principles of the Art Nouveau movement, and he was especially taken with the aesthetics of the Italian Renaissance. His lines were narrow and graceful, achieving "the same effect of pages full of light," and his designs were tailored to the text being printed, giving each an elegance and "eclecticism" seldom seen in other presses of the era (Cave 115).


"I am glad that you like the vellums, I also like them sometimes. I feel with the extinction of the press that I have become a classic, that I have forsaken the world of youth & beauty for fame and repose." - C. Ricketts to L. Hodson, July 13, 1904


An 1899 fire at the Ballantyne Press destroyed most of the engraved blocks and type used by the Press, and since Ricketts had been considering closing the Press as well, he produced one final book, Bibliography of Books Printed by Hacon and Ricketts, and the Press came to a close.

Stay tuned for part two in this two-part series, focusing on Laurence Hodson and his relationship with Charles Ricketts, as revealed in Ricketts' correspondence. 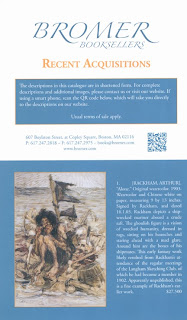 Bromer Booksellers is pleased to announce the publication of a new concept in print catalogues. Featuring 23 of our latest acquisitions, the catalogue is printed in gatefold format on a single sheet of paper, with full-color images for every item and abbreviated descriptions. Full descriptions may be accessed by using a smartphone or tablet to scan a QR code that will take the reader to our website. Print copies are available upon request.

Alternatively, we have just posted a pdf version on our website that has direct links to the full item descriptions and this can be accessed by simply clicking here.
Posted by Meredith at 4:24 PM No comments: