Simons, Dwiggins, and the Modern Letter 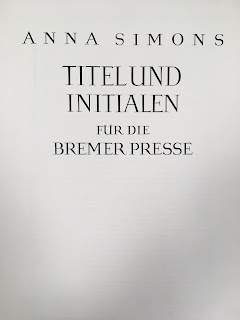 If the modern typographic revolution can be said to have been born in London, the it ought to also be said that it came of age in Germany. The turn of the twentieth century saw the arrival of Edward Johnston to the Royal College of Art and to the calligraphic craft. Johnston explored the use of broad-edged pens for his lettering, renewing the dried-up nineteenth-century penmanship practices with flourishes and individual creativity, and considering the letters themselves, not just their collective referents, worthy of beauty. His teachings influenced the likes of Eric Gill and Percy Smith, but found their greatest hold on the young German, Anna Simons. The simple fact of Simons' attendance at the Royal College of Art was notable, since she matriculated at a time when women were not admitted to Prussian Arts and Crafts schools, and Simons improved upon her standing by becoming one of Johnston's star students.

After completing her training, from 1905 to 1910 Simons taught at Dusseldorf's Royal School of Arts and Crafts, thereby teaching at an institution that in turn had refused to instruct her. During that period she brought exhibitions of English book arts to Weimar, Berlin, and Hamburg, and translated several works on lettering, including Johnston's own Writing and Illuminating and Lettering into German. Yet equal in influence to Simons' determined dissemination of new principles of letter design were her own artistic contributions to the Bremer Presse. Over the course of her career, Simons produced some 1400 titles and initials for the Presse, each one epitomizing new design for a new post-Great War Europe. Doffing the strictures of traditional order and industrial simplicity and conformity, Simons' designs, like Johnstons', presented letters and art themselves, pushing the optics of what they could be and where they could sit on the page. 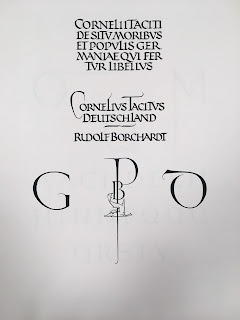 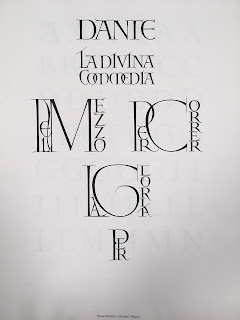 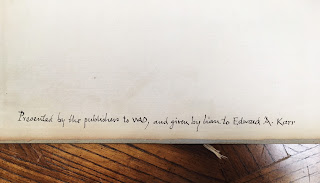 While Simons engaged the German art world in Johnston’s new concepts of lettering and herself applied them to the tangible design of books and their pages, W. A. Dwiggins was doing much the same in the United States. The connection between Simons and Dwiggins is more explicitly laid out in the inscription inside the front cover of our copy of Titel und Initialen fur die Bremer Presse, Simons’ portfolio of titles and initials employed in the first eight-odd years of her efforts for the press: “Presented by the publishers to WAD, and given by him to Edward A. Karr”. Whereas Dwiggins was primarily a type- and book-designer, Karr, a teacher at the Museum of Fine Arts School and fellow Boston artist, was more concerned with penmanship and lettering, closer to the craft of Johnston. But this second relationship ought not to obscure the first, that Dwiggins was given Simons’ portfolio by its publishers, in a clear acknowledgment of the stylistic similarities and vision of the two artists. Both are responsible for ushering bookmaking in their respective countries to meet the style and technology of the twentieth century; Simons’ influence is heavily felt in the Weiner Werkstatte corpus and in the subsequent rise of Art Deco themes, and Dwiggins’ himself designed the typefaces for the clean layout offered by the new Linotype machine.
Posted by Meredith at 11:30 AM No comments:

In speaking of Geoffroy Tory, one most often does so in reference to his Champfleury, which established a distinctly French artistic style while it simultaneously declaimed the use and order of the French language in sound and shape. The volume ensconced Tory as a father of French book production, and in particular of French book arts. He invoked deliberate, simple design in his typography and ornamentation, and demanded the same refinement from the language itself. In a later translation of Lucian, Tory announced to the reader that “l’eficace de l’art D’oratorie est de pouvoir faire ample description non seullement d’une gra[n]de chose, Mais aussi bien de une petite [the impact of the art of oratory is to create a rich description not only of a great thing, but also of a small thing]” (Lucian 1533, 2). 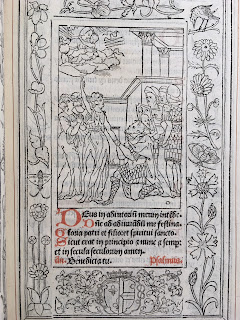 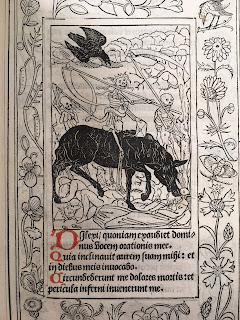 Tory’s insistence that the simple beauty of the vernacular mirror the clean composition of the mise en page climaxed in his 1529 Champfleury (subsequent attempts at creating and recreating Tory’s designs are summarized here: http://luc.devroye.org/fonts-32678.html), but was previously demonstrated in the Horae of 1524 and the later 1527 edition of the same. In the Horae, Tory revolutionized French printing, trading the traditional dark closeness of gothic text for open typography and imagery. William M. Ivins, Jr. referred to it as a “blond book”, in which Roman type and uncluttered woodcuts were harmonious and inviting, rather than cluttered and somber (Ivins, Jr., 84). The 1524 edition was a testament to this new affinity for clean design, bearing sixteen full-page borders and thirteen large woodcuts, the borders being repeated throughout on every page. The 1527 edition pushed the principle still further, incorporating twelve woodcuts and four-piece borders on every page in twenty-six distinct combinations. Most notably, Tory selected a type truly neither Gothic nor Roman, but resembling something like Bastarda script used in France and the Low Countries throughout the fourteenth and fifteenth centuries. This confluence of progressive design and nostalgic type argued that the printed book could match, and even surpass, the contemplation, care, and beauty of the manuscript. 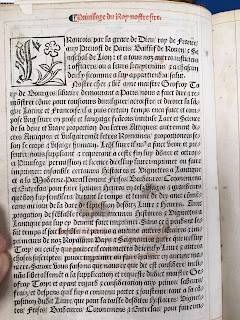 The profundity of Tory’s contribution to the emerging book trade, the newness of what he had conceived and executed, was met with favor in his own time, as evidenced by the book privileges granted to him through the royal court. The French book-privilege system was one the first - certainly the first of its cohesion and systematization - and most effective in early sixteenth century. Unlike Italy, where the book trade thrived but regulation was stymied by conflicts between ununified states, or Britain, where governmental control was clear but the trade was still nascent, the reach and control of the French government was such that it could suitably oversee intellectual property rights. Privileges were not in any way mandatory and it remained the responsibility of the printer, and in select cases the author, to submit a petition for one. Privileges could be granted by the royal chancery, the sovereign courts including Parlement, provincial parlements and officers, and various academic and ecclesiastical institutions. The chancery acted at the whim of the king himself, and thus was both the most prized of privileges and also the slowest, since it required the king to be in residence. Of the parameters considered when granting a privilege, arguably the most important was the “criterion of newness”, as phrased by Elizabeth Armstrong (Armstrong, 92-99). A book had to be a unique contributor to the existing canon or corpus, being a completely new work, a new translation, or containing a substantial addition or improvement to an existing text. It was especially uncommon for religious works to receive privileges. Although a known almost twenty-four percent of all books published under privilege in France through 1526 fall under the classification of religion, none were for editions of the Bible, and prior to Tory only Antoine Vérard received on for his 1508 Les Heures Nostre Dame (Armstrong, 165). Herein one finds acknowledgement of Tory’s genius; both the 1524 and 1527 editions have been granted privileges. The former was awarded a chancery privilege, with the particular mention of his “certaine histoires & vignettes [certain pictures and vignettes]” and his ability to bridge those “a L’antique [of antique style]” and those “a la Moderne [of modern style]” (Les heures 1524, 1v). The latter likewise received a chancery privilege, with the same nods to his art compounded by praise for his knack for “divulguer, acroistre, et decorer la la[n]gue Latine et francoise [revealing, improving, and ornamenting the Latin and French languages]” in both form and function (Les heures 1527, 1v). The first was granted for a period of six years and the second for a period of ten, the overlap suggesting that the two works were considered distinct enough, and each on its own “new” enough, to earn the right of exclusivity.

Tory’s contributions to the French language, in the ways it was spoken and written, in its abstract and physical forms, in itself and its bibliographic context, provided the nation with a contemporary visage and style unmatched elsewhere. He imbued French books with their “Frenchness”, carving out a distinct national space in an international market coming out of its infancy.