Anne Bromer to speak at the Boston Athenaeum


Elizabeth Cary was born into the elite of Boston. Her wealthy maternal grandfather, Thomas Handasyd Perkins, still holds court in a dramatic portrait in the Boston Athenæum’s Long Room. Despite the strict ideas about gender roles of her time, Elizabeth loved science. She married a leading scientific luminary of nineteenth-century America,  Louis Agassiz, a major celebrity in his day and founder of Harvard’s Museum of Comparative Zoology.

Author Anne Bromer describes how, against very long odds, Elizabeth founded Radcliffe College to give women, for the first time, the benefit of a Harvard education. She served as the school’s first president and wrote four books, one of which documented the daily life of women who lived along the Amazon River in Brazil.

Mrs. Agassiz also loved Nahant, a village just north of Boston which juts into the ocean at the northern tip of Boston Harbor. Here she summered from childhood.The town was the inspiration for her first two books, about the scientific and aesthetic properties of the ocean surrounding Nahant— love letters to the sea life of this island community.

The event is open to the public and is $10 for members or $25 for non-members. Pre-registration is required, and a reception will follow the talk. The Boston Athenaeum is located at 10 1/2 Beacon Street in Boston, adjacent to the State House.
Posted by Meredith at 4:52 PM No comments:

Bromer Booksellers has joined a variety of philanthropic organizations in donating money with the goal of erecting a statue of Edgar Allan Poe in Boston. The project has reached its fundraising goal, and the sculpture, titled "Poe Returning to Boston," will be unveiled on Sunday, October 5th, 2014. See below for details about the project: 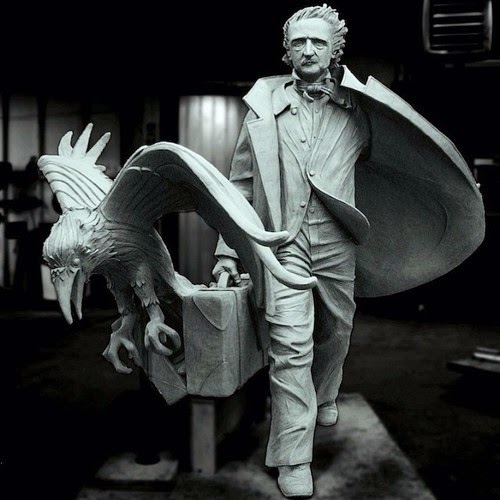 The Edgar Allan Poe Foundation of Boston has set the date for the official unveiling of Stefanie Rocknak’s sculpture, "Poe Returning to Boston," on Sunday, October 5, 2014, at 2pm. A recent grant of $10,000 from the Lynch Foundation helped the project reach its fundraising target of $225,000, a total that will cover the fabrication, transportation, installation, and long-term maintenance of the statue.

Rocknak’s sculpture will be installed at the intersection of Boylston Street and Charles Street South—which, in April 2009, Mayor Thomas M. Menino dedicated to the Boston-born author of “The Tell-Tale Heart,” “Hop-Frog,” “The Raven,” and many other classic works.

Last summer the city’s Public Improvement Commission approved the installation plan for the statue, and the Boston Art Commission gave final approval to the statue’s design. With these approvals in place, Stefanie Rocknak, the sculptor whose work was chosen from 265 proposals, spent last autumn transforming her 18” carved wooden model into a life-sized clay statue. 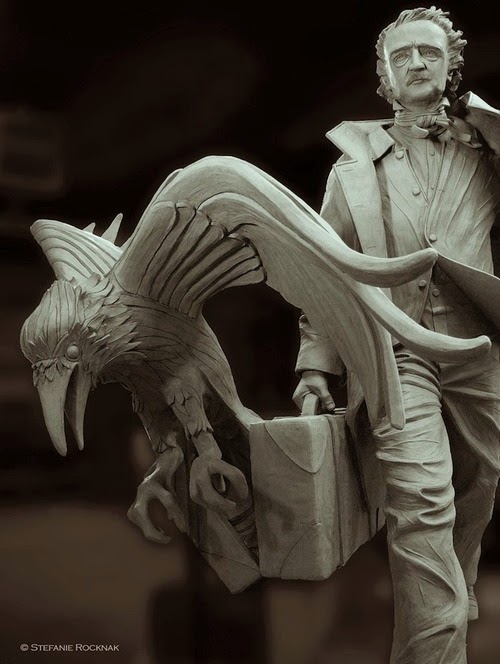 “A wax positive of the pre-bronze, clay sculpture,” Rocknak observed, “is currently being completed by New England Sculpture Services in Chelsea, MA. After I take a look at the positive, which is in pieces, and make any necessary adjustments, the casting will begin. Once the piece is cast and assembled, the patina will be applied. It will be finished by the end of August.”

Shawmut Design and Construction of Boston has been hired to install the sculpture in a process that will begin next September and lead to an official unveiling 2 days before the 165th anniversary of Poe’s death on October 7, 1849.

“As is the case with many public art projects, the total cost of the Poe statue has increased from early projections,” said Poe Foundation chair Paul Lewis who teaches American literature at Boston College. “Costs rise late in a process like this as contracts are negotiated with both the city and vendors. In the case of the Poe statue, prices for some work turned out to be higher than we had expected, while commitments to fund long-term maintenance and contingencies that add elements of the unpredictable arose over the past 9 months. We’re grateful for donors, large and small, that have helped us keep up with these cost increases.” 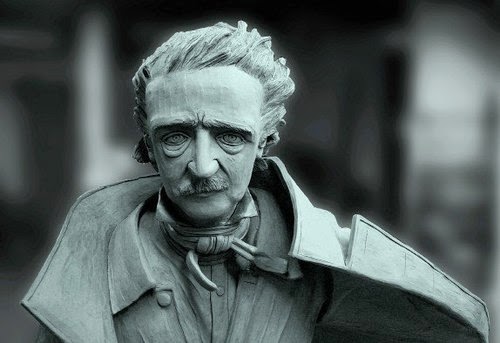 Commenting on the statue, Karin Goodfellow, Director of the Boston Art Commission, noted that "the Commission is looking forward to the installation of Stefanie Rocknak's Poe Returning to Boston in the fall. A model of private-public cooperation, the whimsical piece will connect us to our literary history and remind us of the importance of art for art's sake."
.
“Reaching this point in Boston’s complex public art process required the effort and enthusiasm of many people, including Steff Rocknak, our brilliant artist, and our donors,” said Lewis. “Early on we were thrilled to have the support of the Edward Ingersoll Browne Trust Fund, Stephen and Tabitha King, Poe collector Susan Jaffe Tane, Poe scholars Richard Kopley and Philip E. Phillips, as well as neighbors and abutters, including Michael B. Moskow and Patricia Bartevian.”

Other contributors to the project include the Highland Street Foundation, George B. Henderson Foundation Fund for the City of Boston, Poe Studies Association, Boston College, Boloco, Bromer Booksellers, Samet & Company, PC, L. J. Peretti Company, Volunteer Lawyers for the Arts of Massachusetts, and Poe fans here and around the world. 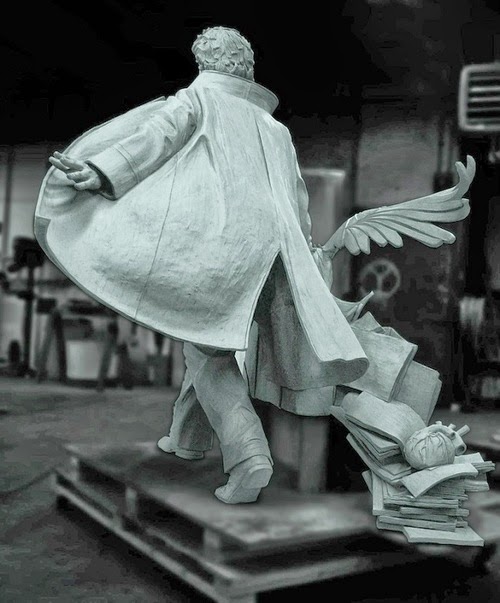 Looking forward to seeing her work completed, Rocknak says, “This has been a long but an enjoyable process. I can’t wait for the day that I am standing in Poe Square, watching the piece come down the road on the transport truck. At that point, it will only be a matter of hours before the sculpture is secured to its final resting place.”

The Edgar Allan Poe Foundation of Boston, a nonprofit 501(c)(3) corporation, invites the public to visit its website and Facebook page to learn more about the project. Information about upcoming events sponsored by the Foundation—including walking tours of Poe’s Boston on Sunday, April 27, noon-1:30pm, and Sunday, May 18, 2-3:30pm, both starting in Poe Square—can also be found on our Facebook page.

Background
Supported by a planning grant from the city’s Browne Fund, the Poe Foundation of Boston has moved through a 5-year undertaking. In 2009 we began to think about ways to memorialize Poe’s connections to the city of his birth. In 2011 we issued a call for artists that resulted in 265 applications from which 3 finalists were chosen. After a period during which about 1,500 people commented on these designs, a statue called Poe Returning to Boston by Stefanie Rocknak was selected. Rocknak describes the work as "a life-size figure in bronze, approximately 5’ 8” tall. Just off the train, Poe is walking south towards his place of birth. With a trunk full of ideas—and worldwide success—he is finally coming home.”


An award-winning member of the Sculptors Guild whose artwork has appeared in numerous publications and in more than 40 exhibitions including at the Smithsonian, Stefanie Rocknak is also a professor of philosophy and the director of the Cognitive Science Program at Hartwick College in Oneonta, New York, where she has taught since 2001. A graduate of Colby College in Waterville, Maine, with a B.A. in American Studies and Art History with a concentration in studio art, she holds a Ph.D. in Philosophy from Boston University. Her interests include the 18th-century Scottish philosopher David Hume (the subject of her forthcoming book), the philosophy of art, and the philosophy of the mind.

Posted by Meredith at 4:08 PM No comments:

Jill Krementz of the New York Social Diary stopped by our booth at the New York Antiquarian Book Fair and entered the fascinating world of miniature books. She wrote about the experience in her coverage of the book fair, which can be read in full here. 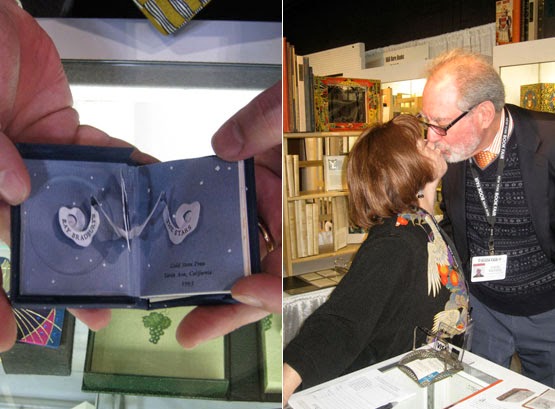 About the above pictures Ms. Krementz wrote:

"Ray Bradbury did pop-ups. While I was looking at this tiny treasure, David Bromer decided to buy it for his own collection ($750).

"'He gets a huge discount,' his wife said. He also got a big kiss.

New Exhibition at the Boston Athenaeum


Collecting for the Boston Athenæum in the 21st Century: Rare Books and Manuscripts

This Exhibition is a celebration of some of the most beautiful and important rare books and manuscripts acquired by the Boston Athenaeum Library since 2000. Many of the books to be exhibited are handsomely illustrated such as Thomas Pattison Yeats' Institutions of Entomology which is celebrated for the individual life-size paintings of insects that were added to the pages of the book by Louisa, Countess of Aylesford. La Création, which was printed in Paris by Francois-Louis Schmeid in 1928, is illustrated by numerous multicolored art deco woodblock print. Fine bindings will also be featured in the exhibit. A particularly unusual one of engraved tortoise shell, dating from 1693, covers The Truest and Largest Account of the late Earthquake in Jamaica.

All of the works on view are “extraordinarily rare.” “‘Rare’ means not very many of them,” Stanley Cushing, Anne C. and David J. Bromer Curator of Rare Books and Manuscripts, explains, “or they could be very valuable, they have very interesting previous owners, or unusual bindings. The show is a selection of a select view. This is the cream of the crop of everything I  have bought since I have been curator.”

“The reason I am curator now is that I worked for decades as a conservator at the Athenæum and knew where we had collected and where the gaps wear. I have worked on filling those gaps. We have built what is meant to be a didactic collection, to show to members, researchers, and staff. They are meant to be studied and all are available for examination and study.”

About the Boston Athenæum:

Founded in 1807, the Boston Athenæum is one of North America’s oldest cultural institutions. The first floor of its National Historic Landmark building at 10 1/2 Beacon Street, Boston, including the Norma Jean Calderwood Gallery, is open to the public Monday, Tuesday, and Wednesday, 9:00 a.m. to 8:00 p.m., Thursday and Friday, 9:00 a.m. to 5:30 p.m., and Saturday, 9:00 a.m. to 4:00 p.m. There is a $5 admission fee for non-members to special exhibitions. Other public events at the Athenæum include exhibitions, lectures, readings, panel discussions, films, and concerts. For membership, events, and other information, please visit www.bostonathenaeum.org or call 617-720-7604.

Posted by Meredith at 3:26 PM No comments: