The World On Display 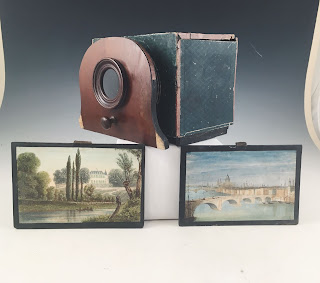 The Polyorama Panoptique is not so much an optical toy as an illusory experience. With the wooden box in one hand and the wooden lens in the other, the viewer may find stretched out before him or her the streets of London with the familiar Westminster Abbey in the background or the noble arch of the Champs Elysées. Slides encapsulate these scenes; each one bears a short cloth tab for easy extraction, a label at the back of the frame to identify the illustration, and many have careful cutouts or points edging chandeliers, skylines, and candles. By adjusting the concertina or the doors at the top and back of the box, and thus allowing different amounts of light to illuminate the scene, streetlamps may glow, windows may shine, and day may turn to night. Forty-two such images accompany this particular Panoptique. 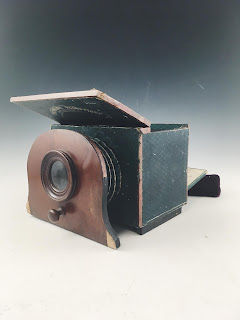 The Panoptique was at its popular height from the 1820s through the 1850s, paralleling the success of its full-size inspiration, the Dioramas created by Louis Daguerre and Charles-Marie Bouton. The Diorama, as opposed to the also-popular Panorama, was a dynamic theatrical experience that required movement of both the scenery and the audience. A custom theater was built in Paris, and later in Regent’s Park in London, that provided two adjacent stages, in front of which the audience would pivot on a turntable. Each stage displayed layers of paintings on linen, made transparent in selected areas and arranged along a deep tunnel. Through skylights, screens, shutters, and colored blinds, sunlight then transformed each image, subtly or dramatically. Thus the audience’s gaze was manipulated not only through the inclusion of multiple images, but also through the transformation of the images themselves. Like the Panoptique’s slides, the Dioramas presented familiar scenes and landscapes: the Holyrood Chapel, Mon St. Godard, and the Harbour of Brest, among others. 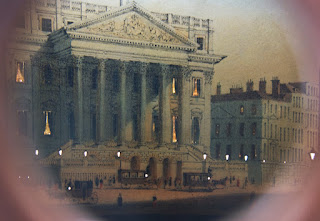 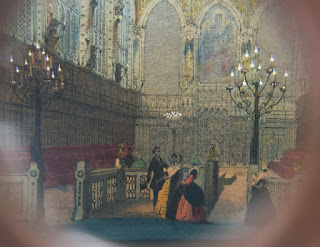 This hyperrealism of highly recognizable natural and manmade features, and implicating the audience in those scenes through compulsory participation, bestows upon the images a sense of the fantastic. The “normal” – the train plying its way through the land, the cabs and horses circling each other in front of state houses, the men and women milling about the large fora of major cities – becomes abnormal, a thing to be wondered at and interacted with on a new plane. Yet the interaction is stunted; there is an artificial but impenetrable distance between the viewer and the object, one that does not exist in real life. This distance, this insistence at holding the viewer at arm’s length while the world changes, is the true source of the Diorama and the Panoptique’s power. They are so profound because they render the touchable untouchable and the real unreal, and all of it highly ephemeral (the Diorama performance lasted at most fifteen minutes, and the Panoptique’s slides may be changed at will). The Panoptique makes this sensation mobile and places ownership of the experience literally into the hands of the viewer. But this shrinkage and consequential responsibility comes with an increased sense of fantasy and dissociation. The viewer may hold the world in his or her pocket, may turn on or off the lights, but despite their best efforts will never reach the place they see. The key elements, that is, the fixedness of scope and scene and the temporality of the images, dictate the extent of the interaction, and ultimately set the viewer at enough of a remove that his or her activity is inevitably futile. This futility generates fantasy, the sense that if the world cannot be totally embraced and understood, that it cannot be real. The Panoptique in this way moves beyond a simple mechanism of entertainment; it reveals to the viewer their incapability and allows them to wonder at it.