Easter Island and its Books

Every now and then I reminisce about the books and people David and I met on our 50-year odyssey as Bromer Booksellers. Below is the story of the remotest place we ever visited and the book collection we built to memorialize that trip.

John Dos Passos called it the “Island of Enigmas,” the most isolated inhabited place in the world. Owned by Chile, it lies more than 2200 miles from the continent of South America and more than 1200 miles from its nearest, inhabited neighbor, tiny Pitcairn Island. The indigenous people call themselves and their 64-square-mile island Rapa Nui. Chileans call the island Isla de Pascua. The first European, a Dutch explorer named Jacob Roggeveen, set foot on the archipelago on Easter morning 1722, and named it Easter Island. It is composed of three dormant volcanic regions with ancient art exposed in a kind of outdoor museum. 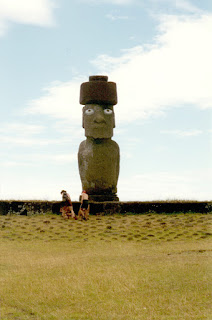 The island’s gathering of enormous carved stone heads standing and scattered about makes it feel haunted. Beginning about 1000 CE the indigenous people began carving heads with torsos out of volcano rock. As a form of ancestral worship, these heads are called moai, and they weigh an average of 14 tons. Most are mounted in groups of various sizes on ceremonial ahus, or rock altars. All face towards the land, as the original Polynesian settlers thought of themselves as the center of the world. For five hundred years, approximately 1000 moai were carved from quarry rock at Rano Raruku in the center of the Island. How these megaliths were transported nearly twelve miles to the edges of the island is a puzzle that only recently has been deciphered. Oral history and modern experimentation appear to confirm that they were walked upright with ropes.

The focus on building monumental heads together with overpopulation depleted resources on the island. Plant and bird life were disrupted to feed the islanders. Fishing boats required too much of the lumber. A rat population found their favorite food in the seeds of the vast palm tree forests and devoured so many that the trees could no longer propagate. More trees were cut down to make way for land to farm. By the 16th century, Rapa Nui was deforested, and the social fabric of its people began to unravel.

Vicious wars were fought, and the monumental heads were toppled. At the height of its population, there were about 10,000 indigenous people, but with tribal battles and the introduction of disease and slavery brought by Europeans, the Rapa Nui people were nearly extinct by the 1870s. The native population reached its lowest count of 110 in 1878.

In 1888, Easter Island was annexed by Chile. The islanders were confined to Hanga Roa, its capital, and primarily were sheep farmers, although a large corporation owned all the sheep farms. Under the dictator Augusto Pinochet martial law was declared. Finally after his dictatorship ended in 1990, private property was restored and tourism began to bring the island prosperity. In 1995 UNESCO named Easter Island a World Heritage site. 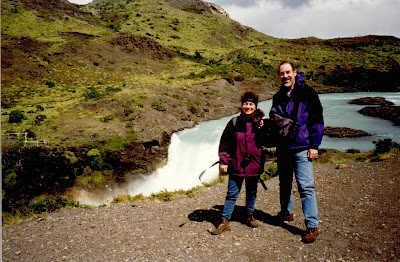 On New Year’s Eve 1997, David and I arrived for a visit. Our flight took five hours from Santiago, Chile. The two-mile landing strip, built in case of an emergency for the U.S. Space Shuttle program, is so long that the LAN-Chile pilot didn’t need to apply the brakes. We stayed in a small, Rapa Nui-owned hotel and spent five days exploring the mysteries and lessons of the island. We were so intoxicated with all we saw that we wanted to mark the experience. As booksellers we paid tribute to the journey by building a collection of books.

Three titles by early explorers were key to the collection, two of which we were able to obtain in first editions, but we were unsuccessful in finding an original edition of the journal of the first European to sight the island.

Jacob Roggeveen (1659-1729) was 63 years old when he and his fleet landed on Rapa Nui, April 5, 1722. In a passage from his journal, Roggeveen saw that the island was already deforested and sandy: “We mistook the parched-up grass, and hay or other scorched and charred brushwood for a soil of arid nature….” The original Dutch edition of 1838 escaped us, but the English translation by Andrew Sharp in 1970 was included.

Captain James Cook (1728-1779) saw Easter Island from HMS Resolution in March 1774. In the second of his three-volume Voyage Towards the South Pole and Round the World there is a description of what he and his crew witnessed when approaching the island: “On the east side, near the sea, they met with three platforms of stone-work, or rather the ruins of them. On each had stood four of those large statues, but they were all fallen down…and all except one were broken by the fall, or in some measure defaced. Each statue had on its head a large cylindric stone of a red colour, wrought perfectly round.”

The third 18th-century Easter Island explorer, whose travels resulted in a set of three volumes, was Jean Francois de La Perouse (1741-1788). He was a French admiral, who commanded two frigates with the goal of completing Captain Cook’s explorations twelve years earlier. Voyage de la Perouse Autour du Monde was first published in 1791 and details a portion of a day on Easter Island in 1786 and the author’s colorful first encounters with its settlers.

“I anchored quite close to the frigate, but the undertow was so strong that our anchors did not hold and we were forced to raise them and tack a couple of times to regain the anchorage. This setback in no way lessened the natives’ enthusiasm. They swam behind us up a league offshore, and climbed aboard with a cheerfulness and a feeling of security which gave me the most favourable opinion of their character. A more suspicious people might have feared, when we set sail, to see itself torn from its relatives and carried away far from home, but the thought of such perfidy did not even seem to occur to them. They went about in our midst, naked and with no weapons, a mere string around the waist with a bunch of herbs to hide their natural parts.” 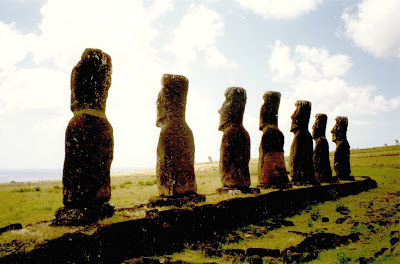 Of the approximately 80 books, pamphlets, and objects we collected, most offered a European or Chilean perspective. Included were some of the proceedings of the Literary and Philosophical Society of Liverpool. We would consider the late-19th-century texts and observations by members who had traveled to Easter Island as unevolved. J. Linton Palmer was interested in identifying wooden tablets and figurines. A.J. Mott postulated that people other than, as he termed, “savages” must have carved the “colossal stone images.”

There were additional books in the collection on explorations, including the voyage of Felipe González de Ahedo, who landed on Easter Island before Captain Cook, in November 1770, and claimed it for the Spanish crown. The English translation account of the expedition was published 128 years later in 1908. In 1915, Captain N.P. Benson’s log of a 900-mile voyage to Easter Island on the schooner El Dorado was printed. He wrote of the harrowing journey “…across a storm-tossed ocean in an open boat, twenty-two feet long, (this) does not fall into the life of every mariner.” 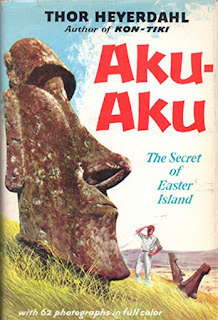 Norwegian explorer Thor Heyerdahl (1914-2002) claimed until his dying day that South Americans were the first to discover Rapa Nui. In 1955, he led a two-year archaeological expedition to the island, which he recounted in Aku-Aku. That book and other volumes by Heyerdahl on the art and mystique of the island were part of the collection. Until very recently, Heyerdahl’s belief of indigenous South Americans being the first to settle the island was considered incorrect. The prevailing theory had been that Polynesians were the first settlers. Now, highly developed DNA analysis has reopened the question. As is true with many of the mysteries of Rapa Nui, new data has changed the science, and it now appears as if the discovery came from both the West and the East.

The collection included books and periodicals of archaeological expeditions and of secrets and mysteries of the religious rituals of the island. Tales from the past of cultural practices and viewed from an “Ethno-Psychological” viewpoint were set out in Werner Wolff’s 1948 book, Island of Death. Arkham House published The Web of Easter Island in 1948 by the science fiction writer, Donald Wandrei. Dedicated to H.P. Lovecraft, the horror story reinforced perceived terrors of Easter Island. Coupled with the myths and riddles were books about the art and language of the Rapa Nui people, many illustrated with photographs. 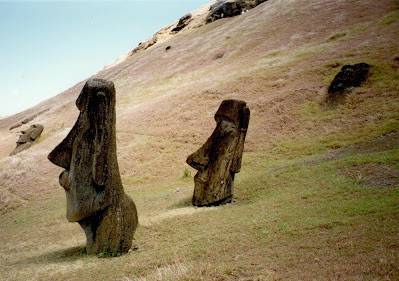 In 2006 the playwright Edward Albee went to Rapa Nui and wrote about it in a New York Times three-page color spread. He was 78 years old and had dreamed of the trip for fifty years. He wrote of the nature of life on the island with statues in situ where the ancient carvers left them, unfinished and as yet unborn. He spoke of moai raised on their pedestals as if living beings, while others remained face down where they were once toppled, now dead. The full cycle of life is an essential part of Rapa Nui.

Our trip to the island was a once-in-a-lifetime experience for David and me. In building a book collection, we were able to keep the adventure close. It was our way of remembering those five days of wonderment. As time and memory faded, so did the intensity of that moment. In 2012 we sold the collection en bloc to a colleague in Australia.