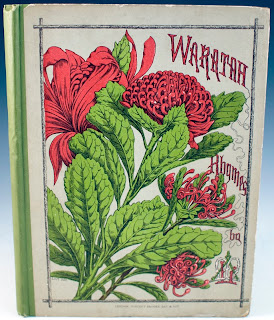 There are seven American chapbooks to begin this 36th e-catalogue of Illustrated Children's and Fantasy Books. The illustrations of Harry Clarke, Walter Crane, Edmund Dulac, and six Arthur Rackham titles are among those representing British printings. European children's books from Spain, Portugal, France, and Germany are listed. An Australian juvenile book in verse rounds out this international offering. In seeking unusual formats, you will find panoramas and shaped books. A Sendak and a Seuss, of course, complete the entrée of children's delights.

View the e-catalogue here, and enjoy!
Posted by Meredith at 11:18 AM No comments:

Anne Bromer has written a short essay on her recollections about Edward Gorey, with whom she had a professional and friendly relationship for almost twenty years. The Bromers published two miniature books written and illustrated by Gorey, as well as several other smaller projects, and they built a substantial personal collection of his works. The stories Anne shares have been published and nicely illustrated by our friends at the Edward Gorey House on their blog.

You can view the blog post here. We hope that you will take a moment to read about this talented man in the words of someone who knew him personally.
Posted by Meredith at 4:25 PM No comments:

Summer, as depicted by Richard Bigus 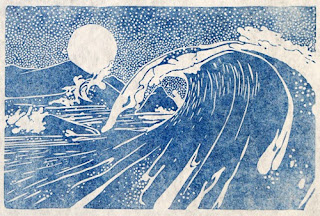 Sitting on a gatepost,
a slow fog
enters
over marsh,
stars vanish.

This poem by Richard Bigus about fog, marsh, and surf takes on new dimensions when rendered on paper by him.

An example of concrete printing, this broadside is printed using various sizes of type handset at different angles. The diminishing size of the type in the last line and its multi-directionality evoke the fading presence of the "surf's echo," perhaps better than the blue linocut by Tom Killion depicting the same surf above.

Bigus learned the craft of printing under the tutelage of William Everson and Jack Stauffacher at U.C. Santa Cruz. There he printed a few books of his own verse as well as broadsides of concrete and haiku poetry, such as this one. For him, the visualization of the word became paramount. We think he achieved that goal quite well here.

We wish everyone a warm, restful summer, filled with the poetry of nature.

P.S. You can view another example of Richard Bigus' work that we featured on this blog last year here. He completed that work four years after this broadside, and you can see the level of mastery he achieved in his approach to concrete printing in that amount of time.
Posted by Meredith at 12:26 PM No comments: