The Landscape of a Binding: Caro Weir Ely's Style, C.E.S. Wood's Ambition, and Their Friendship 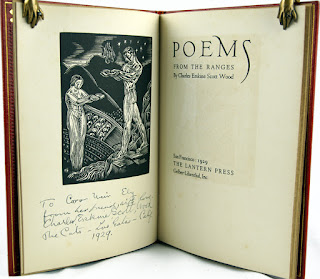 In 1920, the Book Club of California, then still a nascent entity, having published its first letterpress volume in 1914, hosted an exhibition of finely bound books crafted by Caroline “Caro” Weir Ely. Though Ely never matched the prominence of her father, impressionist Julian Alden Weir, or the stature of her grandfather, West Point professor and member of the Hudson River School Robert Walter Weir, she found uniqueness and acclaim as a bookbinder throughout the early twentieth century. As evidenced by the Book Club of California’s exhibition, the literary community, as male-driven as it was at the time, celebrated her skill and apparently appreciated her minimalist style. One man in particular, Charles Erskine Scott Wood, found Ely’s work worthy of continued patronage; at least four books were bound by Ely for Wood, or with Wood in mind. These are The Vintage Festival by Sarah Bard Field, printed in 1920 and bound by Ely on behalf of Field as a gift from Field to Wood, her husband; Julian Alden Weir: An Appreciation of his Life and Works, printed in 1921 and bound by Ely as a presentation copy to Wood; Snow Bound, A Winter Idyl by John G. Whittier, printed in 1911 and bound by Ely sixteen years later as a gift from Wood to Field; and the present Poems from the Ranges by Wood, printed by the Grabhorn Press in 1929 and bound by Ely for Wood. 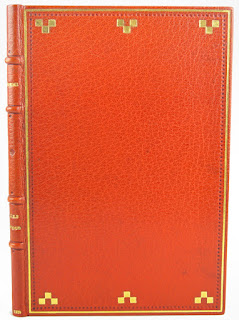 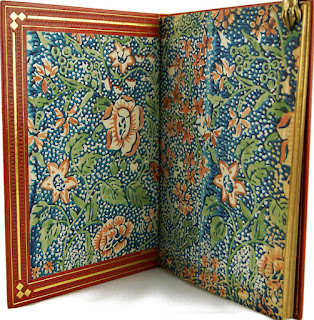 The relationship between Wood, a military man, lawyer, and author, and Ely was not simply borne by a mutual appreciation of each other’s crafts, nor was it the avuncular fondness of a man for the daughter of an artist he admired and knew as a frequent associate (Julian Alden Weir painted a portrait of Wood in 1901, and a letter from Wood to Weir is featured in Julian Alden Weir: An Appreciation of his Life and Works). Rather, Wood and Ely seem to have known each other as genuine friends. The inscription in the Ely-bound copy of Poems from the Ranges reads: “To Caro Weir Ely, from her friend, with love. Charles Erskine Scott Wood. The Cats – Los Gatos – Calif. 1929”. The friendship between the elder Wood, who was in his twilight years and would die in 1944 at the age of 91, and the much younger Weir, who was born in 1885 when Wood was already in his thirties, certainly follows a pattern of relationships that Weir held with younger artists and activists in his later life, including Ansel Adams, John Steinbeck, and Robinson Jeffers. The difference, however, is that Ely was not based in California or in the Western States at all, instead calling Connecticut home and finding particular footing at Florence Griswold’s artist colony in Old Lyme, where Ely herself eventually settled. What bound Ely and Wood, as it did Adams and Steinbeck and other figures under Wood’s wing but removed from the West, such as Childe Hassam, Margaret Sanger, and Eugene Debs, was their continuous and intrinsic awe for place and landscape, their fascination with the land and the impressions of humans upon it.

For Wood, this passion for nature and nature-dwellers emerged in his transcription of the surrender of Chief Joseph of the Nez Perce at the end of the Nez Perce War in 1877. While much of his account concerns the underhanded dealings of one of his fellow officers, Wood goes out of his way, however briefly, to laud the interactions between the Native peoples and the land. In one instance, he recounts hunting buffalo with two Native scouts while the snowy Bear Paw Mountain looms ahead of them (Wood). Other flora and fauna punctuate the story – the imposing pass into Clark Basin, the plains of the Yellowstone and Missouri Rivers, coyotes, and horses tame and wild – in such a way as to insist upon the largeness of the landscape and the consequential, or perhaps continual, smallness of the men. When Chief Joseph emerges to deliver his speech of surrender, then, with “quiet pride”, he seems the largest, the most capable of standing against the forces of nature, of any of the figures mentioned in the narrative (Wood). This attitude translated to Wood’s later work as an attorney advocating for Native rights, in which he continually insisted on the primacy of the Native peoples’ ownership, if such a term may be used, of the lands from which they had been forcibly removed. Wood’s belief in the inevitable hugeness of the landscape was also clear in his artwork, which featured vastness of the frontier surrounding Portland, Oregon and other areas of the American West rendered in watercolors. Wood’s portrayals are hardly intimidating, however. Instead, his decision to cast the open sky, the thick arms of the trees, the limitless coast in soft watercolors softens their size.

Likewise for Ely, nature was a constant, comforting presence, a wild thing to strive with rather than against, a thing to admire and leave free. In her youth, Ely recalled, when she traveled with her family from Branchville to Windham, Connecticut, she reveled in disembarking the train “hot and dirty”, and with great joy “piled onto the waiting carriages, breathing the fresh air and enjoying every moment of the four mile drive over the plains” (Lest We Forget quoted in Dawson, chap. 2, f.16). A similar attitude colored her written and artistic recollections of Weir Farm, now a National Historic Park. The farm sported several gardens, and Ely and her sisters were very likely responsible for the design and upkeep of the Secret Garden, which Ely praised for its endurance, stating that it was “still full of the plants [she] put in” twenty years later (National Park Service, 3). Her etchings and sketches cast the farm in a similar light, drawing out the balance between nature’s whims and the boundaries and designs of the humans who lived there. The sure lines of the farmhouse blend with those of the brush, and the trees cast over the paths and fences insistent shadows. It is no great extrapolation to suggest the same balance characterizes Ely’s bindings. In each of the four examples cited here, Ely’s gilt work and tooling highlights the natural textures of the leather. For Poems from the Ranges, the minimalist exterior draws the eye to the crackings in the morocco, and makes the brilliant floral paste-paper endpapers all the more striking. It is as much a celebration of the feel of a book, and of the materials that make it, as it is a showcase for Ely’s own creative capabilities.

Wood, Charles Erskine Scott. “The Pursuit and Capture of Chief Joseph”. Archives of the West, 1874-1877. 2001. https://www.pbs.org/weta/thewest/resources/archives/six/joseph.htm.