Featured Item of the Week: Calendars 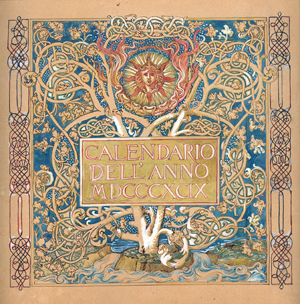 New Year's is traditionally a time to look forward, and also to reflect on the past. In the spirit of the holiday, we would like to highlight four calendars from our stock, from very different time periods: A 1969 wall calendar commemorating the African American Civil Rights Movement with bold prints, a calendar of color woodcut illustrations published by the leading art journal of the Vienna Secession in 1903, an ornate Renaissance-inspired Italian calendar from 1899 accompanied by the original pen and watercolor drawings, and a luxurious embroidered almanack from 1792 small enough to be tucked in one's pocket. 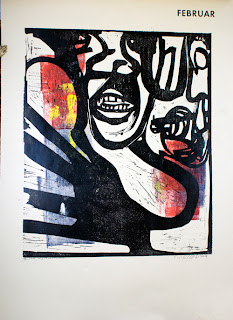 The German artist Hans Christoph Schmolck created this calendar as a tribute to the African American Civil Rights Movement, titled Black Power: 1969, in 1968. Each month is illustrated with two pages of signed prints celebrating the African-American Civil Rights Movement: one with the name of the month in English, and the other in German. The English pages bear black & white prints of shadowy figures reminiscent of collages, and the German pages have large, bold linoleum cuts accented with color. The powerful images express rage, fear, pain, and strength, and many reference specific events, including the Orangeburg Massacre in February, 1968 and the Newark Riots of 1967. Several important figures are also depicted: April's linoleum cut is a tribute to Martin Luther King, Jr., with the date of his assassination. The calendars list the dates in a vertical format, so that it can be used in any year; the artist writes on his website, "This calendar is perpetual as long as misanthropy and violence dominate the world." 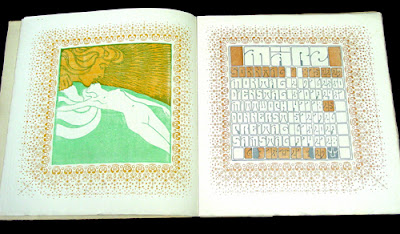 Another calendar remarkable for its illustrations is the Ver Sacrum Kalender 1903, which has thirteen bright color woodcuts from various artists, including Karl Müller, Wilhelm List, and Max Kurzweil. The calendars and decorative borders were designed by Alfred Roller, whose lettering was a major influence on the psychedelic poster art of the 1960s. Ver Sacrum was the major publication of the Vienna Secession movement, a group of artists who banded together in Vienna at the turn of the century to challenge what they saw as the conservative, academic bent of the city's art establishment. The magazine was published from 1898 to 1903 and produced a calendar each year. This is the last calendar in the series. 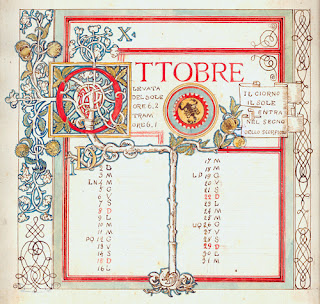 This pre-Raphaelite example, Calendario dell'Anno, 1899, provides insight into how the artwork for a calendar was created: the finished, printed calendar is accompanied by twenty-one of Giuseppe Cellini's original watercolor and ink drawings, of which three were not used, and one is a duplicate.The printed calendar is illustrated with seventeen chromolithographed plates, which accompany a series of musical arrangements by Salvatore Saya, with lyrics by the Italian poet Ugo Fleres. In the original art, the panels for the months of the year have, in almost all cases, placeholder text handwritten by the artist that was replaced by type in the final version. These intricate calendar illustrations also clearly demonstrate the sway that the Renaissance aesthetic had on the Arts & Crafts movement, with elaborate floral and foliate designs, initials decorated with interlacing, and symbols for each sign of the zodiac, all in regal shades of red, blue, green, and gold. 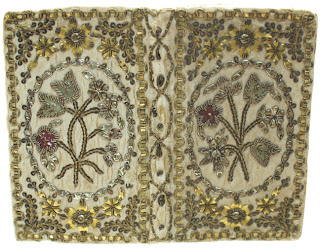 This deluxe, near-miniature almanack from 1792, Cupidon Logicens ou les Pedagoges, a Cythere, is notable not only for its thirteen hand-colored engravings, but also for its richly embroidered binding. In a time before iPhones and BlackBerrys, almanacks were used to keep track of dates and appointments. Not merely calendars, they also include tables of useful information such as holidays, currency exchange rates, and the phases of the moon. In addition to the usual contents of an almanac, this tome contains tales of love told in rhyming verse and an acrostic poem based on the name "Sophie." Its lovely white satin embroidered binding with floral motifs in gold thread with sequins and metal plaquettes was intended to convey the status and sophistication of the book's owner.

For more information on these items, and several other almanacks and calendars, please visit our website. Thank you for reading, and all of us at Bromer Booksellers wish you a very happy New Year. 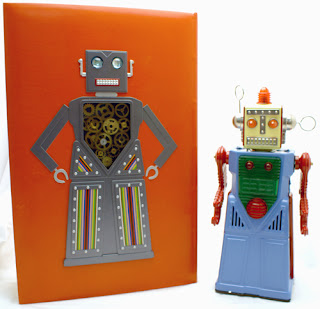 One of our most unusual items is a copy of Alfred Jarry's surrealist play Ubu Roi: Drame en Cinq Actes, notable not only for its illustrations by the Chilean expressionist artist Roberto Sebastian Matta, but also for its bold designer binding by Georges Leroux. The book is accompanied by a reproduction of a 1950s Japanese toy robot, which served the inspiration for Leroux's design. Leroux chose to depict Father and Mother Ubu, the drama's main characters, as robots sculpted in relief on the front and rear covers, set against a background of bright vermilion calf. He incorporated a series of gears, springs, and clock wheels into the chest cavities of both figures, and added multi-colored wires, metal widgets, sheet plastic, and marbles. One of Father Ubu's most striking features is that his holographic eyes appear to spin in his head. 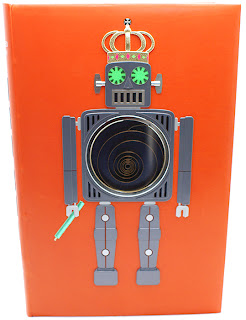 In The Art of Contemporary Bookbinding, Jan Van Der Marck writes, "Attracted to the incongruous, like the Surrealists, Leroux indulges his love of tinkering by analyzing, dissecting, and reproducing the most salient imagery and features of a given text and illustration," often using irony and "tongue-in-cheek visual rhymes." For Ubu Roi, he drew on Matta's bold color palette, and the spiral clock spring inside of Father Ubu's chest plays on the characteristic, distinctive spiral designs used both in Matta's illustrations and in Jarry's original depiction of the greedy ruler.

For more information and images of Matta's illustrations, please visit our website.

Thank you for reading, and we look forward to sharing another of our favorite items with you next week.
Posted by Jessica at 5:45 PM No comments: 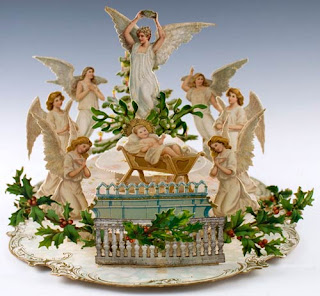 For our latest e-catalogue, we are remembering Christmas by highlighting materials that speak to the spiritual and communal nature of the coming Christian holiday. Certainly, the Bible is key to this, and so we have included a copy of Officina Bodoni's Gospels inscribed by Pope Paul VI, as well as a number of miniature Bibles and Psalters. In remembering Christmas, it is also important to recall the magic of the season as experienced by children: a wonder that can be found in the unfolding of an elaborate nineteenth-century pop-up Christmas card or a set of Dutton's chromolithographed Christmas Box Series in their original box labeled "To All Good Boys and Girls."
View the e-catalogue here.
Posted by Meredith at 3:17 PM No comments:

More from the Boston Book Fair

Check out a video from the 35th Boston International Antiquarian Book Fair, held this past November.

E-catalogue 16: Bound to be Enjoyed 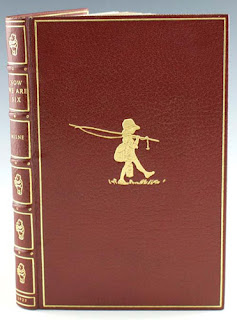 Our E-catalogue 16: Bound to be Enjoyed offers a choice selection of books attractively bound in leather. The books listed here represent all our specialty areas: from the first edition of Gay's fables to be illustrated by Thomas Bewick, to the earliest presentation copies of Lewis Carroll's Sylvie and Bruno and Sylvie and Bruno Revisited, to a miniature manuscript of FDR's inaugural address. All are in fine collector's condition; any one would make a welcome addition to the library of the discerning bibliophile on your gift list. View the e-catalogue here or visit our website for more information.
Posted by Shannon at 12:55 PM No comments: 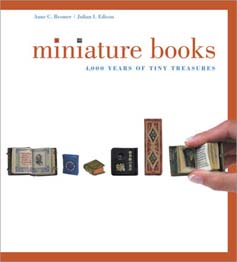 Anne Bromer and Julian Edison's beautifully presented book on miniature books, Miniature Books: 4,000 Years of Tiny Treasures, was featured in an article in the Chronicle of Higher Education, found here.

A deluxe edition of the book is available for sale on our website, a rare opportunity from an edition of 250 copies that sold out before the book was published. Each copy is signed by the authors and includes a facsimile of the book in miniature format, together in a specially designed slipcase. It is an award-winning design, having taken first place in the Gift Book category at the prestigious New York Book Show in March 2008. "[The] miniature book was a perfect touch," the judges commented. "Beautiful reproductions [and a] well executed, special slipcase."

For more information, see our website or contact us directly.
Posted by Meredith at 12:59 PM No comments:

Featured Item of the Week: Culinaria by Laura Davidson 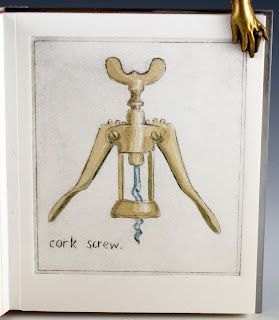 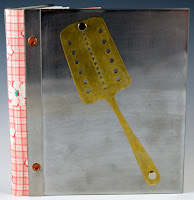 After a brief hiatus, our featured item of the week is back again. This week, I've selected a book by a local Boston artist, Laura Davidson. Davidson's Culinaria is a collection of eleven drypoint etchings of practical kitchen utensils, including a whisk, corkscrew, and masher, delicately colored with ink washes. The illustrations are bound in brushed stainless steel covers, which have a brass-colored metal spatula attached to the front with small, strong magnets. The spine is a pink, white and green floral, vintage-style cloth, reminiscent of 1940s feed-sack prints. Davidson also made the cheerful, pink-checkered endpapers using original linoleum prints of knives, spoons, forks, and measuring cups. 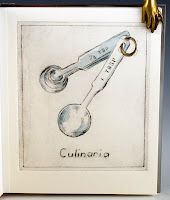 Davidson is known for her tunnel books depicting some of her favorite places, from Fenway Park to Boston's Fort Point neighborhood, where she lives and works. Her work is currently on display at the Boston Athenaeum, as part of their exhibition of the outstanding artist's books in their collection, which was funded in part by Anne & David Bromer.

For more information, please visit our website or contact us. Thanks for reading, and we look forward to sharing another item with you next week.
Posted by Jessica at 5:52 PM No comments: