On the last day of National Poetry Month, we present excerpts from the first commercially published books by five acclaimed authors: Willa Cather, James Joyce, Hugh M'Diarmid, John Updike, and Seamus Heaney. Though virtually unknown at the time these books were published, one can see a glimpse of the enduring greatness to come from these writers, only two of whom would pursue a career in poetry.

Ashodel
As some pale shade in glorious battle slain,
On beds of rue, beside the silent streams,
Recalls outworn delights in happy dreams;
The play of oars upon the flashing main,
The speed of runners, and the swelling vein,
And toil in pleasant upland field that teems
With vine and gadding gourd--until he seems
To feel wan memories of the sun again
And scent the vineyard slopes when dawn is wet,
But feels no ache within his loosened knees
To join the runners where the course is set,
Nor smite the billows of the fruitless seas,--
So I recall our day of passion yet,
With sighs and tenderness, but no regret.


I
Strings in the earth and air
Make music sweet;
Strings by the river where
The willows meet.

There's music along the river
For Love wanders there,
Pale flowers on his mantle,
Dark leaves on his hair.

All softly playing,
With head to the music bent,
And fingers straying
Upon an instrument.

Pearl Avenue runs past the high-school lot,
Bends with the trolley tracks, and stops, cut off
Before it has a chance to go two blocks,
At Colonel McComsky Plaza. Berth's Garage
Is on the corner facing west, and there,
Most days, you'll find Flick Webb, who helps Berth out.

Flick stands tall among the idiot pumps--
Five on a side, the bubble-head style,
Their rubber elbows hanging loose and low.
One's nostrils are two S's, and his eyes
An E and O. And one is squat, without
A head at all--more of a football type.

Once Flick played for the high-school team, the Wizards.
He was good: in fact, the best. In '46
He bucketed three hundred ninety points,
A county record still. The ball loved Flick.
I saw him rack up thirty-eight or forty
In one home game. His hands were like wild birds.

He never learned a trade, he just sells gas,
Checks oil, and changes flats. Once in a while,
As a gag, he dribbles an inner tube,
But most of us remember anyway.
His hands are fine and nervous on the lug wrench.
It makes no difference to the lug wrench, though.

Off work, he hangs around Mae's luncheonette.
Grease-gray and kind of coiled, he plays pinball,
Smokes those thin cigars, nurses lemon phosphates.
Flick seldom says a word to Mae, just nods
Beyond her face toward bright applauding tiers
Of Necco Wafers, Nibs, and Juju Beads.

Between my finger and my thumb
The squat pen rests; snug as a gun.

Under my window, a clean rasping sound
When the spade sinks into gravelly ground:
My father, digging. I look down

Till his straining rump among the flowerbeds
Bends low, comes up twenty years away
Stooping in rhythm through potato drills
Where he was digging.

The coarse boot nestled on the lug, the shaft
Against the inside knee was levered firmly.
He rooted out tall tops, buried the bright edge deep
To scatter new potatoes that we picked
Loving their cool hardness in our hands.

By God, the old man could handle a spade.
Just like his old man.

My grandfather cut more turf in a day
Than any other man on Toner's bog.
Once I carried him milk in a bottle
Corked sloppily with paper. He straightened up
To drink it, then fell to right away

Nicking and slicing neatly, heaving sods
Over his shoulder, going down and down
For the good turf. Digging.

The cold smell of potato mould, the squelch and slap
Of soggy peat, the curt cuts of an edge
Through living roots awaken in my head.
But I've no spade to follow men like them.

Between my finger and my thumb
The squat pen rests.
I'll dig with it.

Posted by Meredith at 1:12 PM No comments: 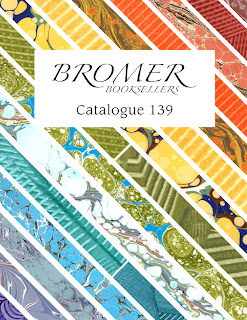 Now that we are back in the office, we are pleased to announce Catalogue 139, our latest full-color print catalogue, containing newly acquired material from across our subject specialties. Print copies are available upon request, or you can view a pdf version here.
Posted by Meredith at 4:55 PM No comments:

Email ThisBlogThis!Share to TwitterShare to FacebookShare to Pinterest
Labels: catalogue

More than a week after the bombings at the Boston Marathon that killed three, injured hundreds, and shut down a six-block section of Boston's Back Bay, the area around Copley Square has been released to reopen for business. We at Bromer Booksellers expect to be back in our shop on Wednesday, April 24th, during our normal business hours of 9:30am to 5:30pm.

We would like to reiterate how stunned and horrified we are by the tragedy that occurred last week. Our hearts are with the victims and their families as they, and the city as a whole, begin to heal from this trauma. Though we will be glad to resume our daily lives, we know that nothing will be the same again.
Posted by Shannon at 9:28 PM No comments: 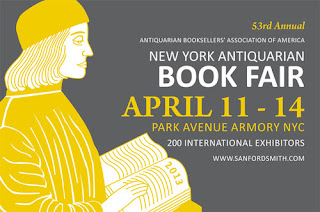 Bromer Booksellers will be exhibiting at the New York Antiquarian Book Fair this year in booth C18. We will be bringing some excellent items for our booth, highlights of which include:


We will also have copies of our new catalogue available for anyone who is not on our mailing list. For more information on the book fair, see below, and we look forward to greeting you in our booth at the book fair this weekend, April 11-14th.