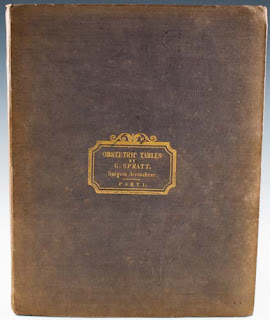 Our latest oddity is George Spratt's Obstetric Tables: Comprising Graphic Illustrations, with Descriptions and Practical remarks; Exhibiting on Dissected Plates Many Important Subjects in Midwifery, a rare anatomical textbook on obstetrics and midwifery with lithographed plates, most of which incorporate multiple movable flaps. 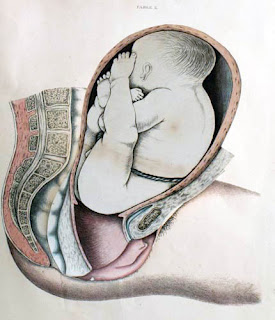 Flaps had been used in anatomical texts since the sixteenth century, but they did not reach their heyday until the nineteenth century with the emergence of new color printing techniques. With this new visual interest, anatomical flap books became more mainstream and were no longer just for doctors, surgeons, medical students, and anatomists, but were viewed by a much wider audience, including homeopathic physicians and artists. However, despite the mechanization of color printing and advancement in printing techniques, George Spratt's Obstetric Tables was produced using manual procedures, such as hand-coloring of the lithographed plates. In addition, the flaps, some of which have four or five movable layers in order to explicitly demonstrate each step of a procedure, were painstakingly applied to the pages so that the top flap had extra space to accommodate the lower layers and still lay flat when closed. To read more about the mechanics of flaps books, see Duke University Library's exhibit on anatomical flap books here. 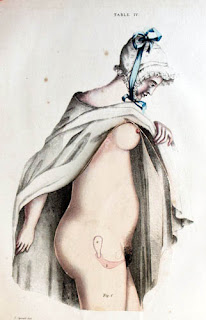 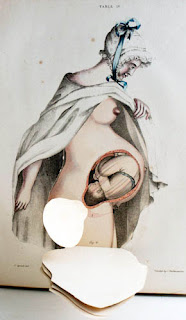 George Spratt was an obstetrician and print-maker whose anatomical textbooks were enormously popular both in England and in the United States. His Obstetric Tables was first published in London in 1833 and went through multiple editions in both countries, each one claiming to be better than the last. The edition shown here is the third, "considerably enlarged and improved." It is comprised of two volumes and was published in London in 1838 by John Churchill. 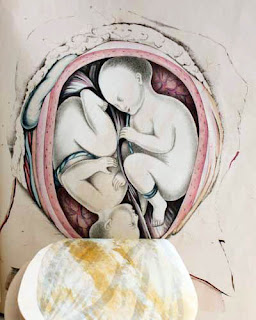 Originally intended for other obstetricians, midwives, and surgeons, Obstetric Tables simulated surgery without having to actually cut open a human body. The flaps gave the illustrations the three-dimensionality of a model and reproduced dissection as they were unfolded: flaps were used to represent the female body's external and internal changes during pregnancy, to demonstrate how to use instruments such as forceps during delivery, to indicate the locations of organs, and more. Both volumes of the third edition open with long lists of subscribing surgeons, and it is apparent from this, as well as from glowing reviews of the book in contemporary medical journals, that this textbook was often used in practice. 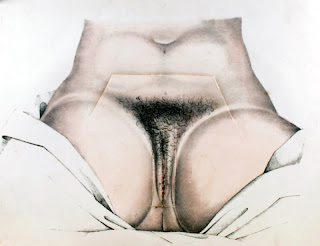 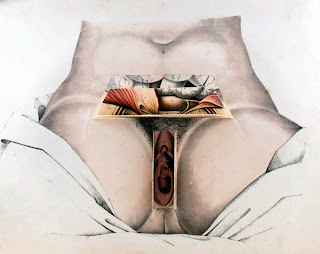 The general public's interest in what had previously only been used for clinical purposes inspired a change in how these anatomical textbooks were presented. One anatomist, Frederick Hollick, was brought up on obscenity charges for his publication, and anatomy books began to appear with locks incorporated into the binding to prevent indiscriminate viewing (or perhaps hint at what was inside to drive up sales). 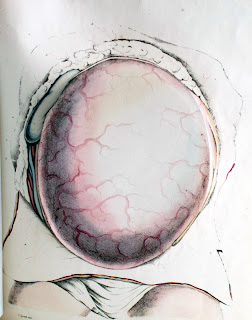 Anatomical flap books eventually gave way to other methods of displaying and studying anatomy, including the flap books' successor, layered anatomical transparencies. Now computer representations, such as CT scans, can go far beyond the hypothetical dissection of bodies depicted in Obstetric Tables to show virtual slices or three-dimensional representations of living human bodies, all without requiring surgery. Obstetric Tables and other anatomical flap books have become oddities to our modern eyes, which makes one wonder how many of our current practices and conveniences will be considered unusual two hundred years from now.

Thank you for reading about our latest oddity, and we hope you join us again next week.

E-catalogue 24: By the Waters

Whether it's fly-fishing at the lake, or sailing on the open ocean, water figures very largely in our summer activities; that it makes up most of the earth's surface and the human body means that it is a central element in our lives. It is only natural, then, that water should also be a major symbol in literature, and we can see this from the Old Testament to Moby Dick. For our latest e-catalogue, we have therefore pulled together a surprisingly diverse group of books in which water plays a thematic role.

In some cases, the book strives for a visual interpretation of water, as is the case with Sylvia Rennie's designer binding for Arthur Rimbaud's Le Bateau Ivre, in which she creates a sculptural rendering of undulating waves on the upper cover. For Hemingway, it was the central metaphor for an indifferent nature against which humanity struggles in his compact, powerful novel, The Old Man and the Sea. 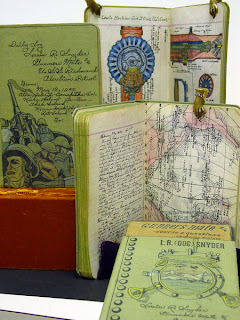 Moving past the larger symbolic representations, there are glimpses here of the ways in which people have earned a living on the back of the sea. Several items relate to whaling, including a 19th-century "slops" book from a New Bedford whaling vessel, and a finely-printed history of whaling in Japan. There are also reminders here that water can be territory that must occasionally be defended, as demonstrated by the illustrated manuscript logbooks of a gunner's mate aboard the USS Richmond during World War II, or in the miniature Pocket History of the American Navy and Naval Commanders.

A common thread tying the nearly thirty items on offer together is that the human imagination has derived much inspiration from the water that surrounds us. We hope you will find something here that inspires.
Posted by Meredith at 11:15 AM No comments: 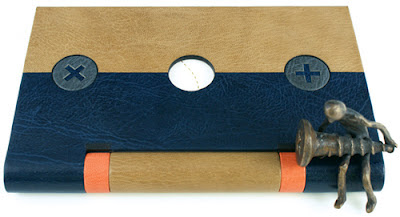 28 Characters, 4 Men, 10 Women, 5 Boys and 8 Girls. (N.p., 2008). An unusual alphabet book by bookbinder, typographer, and illustrator Eri Funazaki and Danny Flynn, a fellow typographer who wrote the text. Playing on the dual meaning of “characters,” Flynn and Funazaki created personalities for all twenty-six letters of the alphabet and two punctuation marks: a female ampersand and a full stop “of undetermined gender.” The characters are described in short, witty, often rhyming “living eulogies” that reveal their quirks and neuroses.

In a playful binding of navy blue, tan, and orange Harmatan goatskin that resembles a giant door hinge. The covers have inlays shaped to resemble the tops of screws. One hole is left open in the center of the front cover, revealing the gold tooling on the first page. A bronze figure of Funazaki’s “little man” character, which has appeared in several of her artists’ books, is seated and holds the missing screw from the binding across his lap.
Posted by Meredith at 4:15 PM No comments: 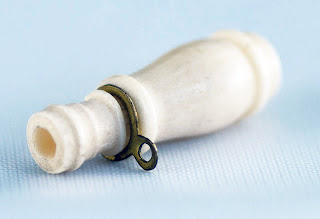 For the inaugural edition of our new feature, Oddities, we present a miniature optical device called a "Stanhope." Stanhopes are glass rods that have a microscopic image at one end and a tiny, but powerful magnifying lens (a Stanhope lens, invented by Lord Charles Stanhope, third Earl of Stanhope) at the other. They were very popular during the Victorian Era and were often sold inside souvenir charms that could be hung from a chain or brooch. These charms came in many different shapes, from binoculars and spyglasses, as seen above, to glass barrels that were sold at Niagara Falls. However, Stanhopes could also be larger and incorporated into items such as knives, Meerschaum pipes, canes, pens, and more. 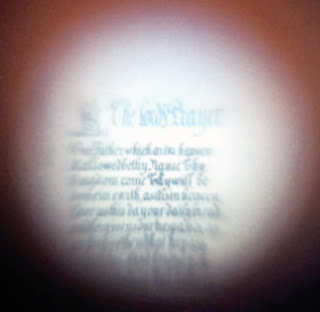 Our Stanhope is a charm, probably made in France, that contains a very tiny version of The Lord's Prayer, printed in a circle not more than 2mm. in diameter. It is set into an ivory cylinder measuring 1 by 1/4 inches (25 x 6mm), turned to resemble a miniature spyglass or telescope.

Stanhopes continued to be produced into the 1900s, most notably as advertising and promotional items for companies like Anheuser-Busch. They fell out of production in the 1970s but have recently experienced a resurgence on the web with companies creating new Stanhopes from personal photographs.

We hope you have enjoyed learning about these tiny oddities, and we look forward to sharing more curiosities from our collection with you next week. Thank you for reading.

For more information on Stanhopes, see this article from Stanhope MicroWorks and this post from Wicked Darling.
Posted by Shannon at 12:45 PM No comments: 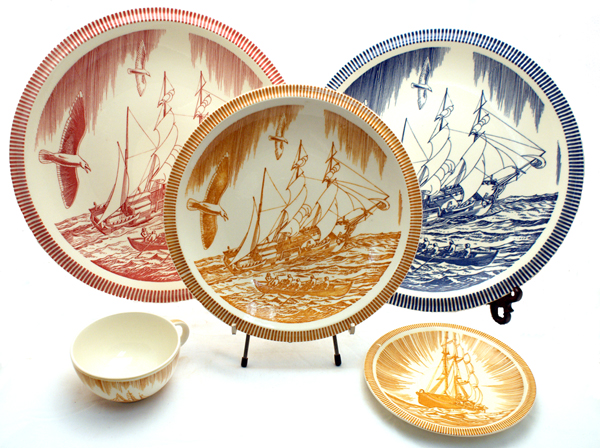 We don't just have books! Here is a glimpse into some of the unusual decorative arts pieces Bromer Booksellers currently has in stock: Moby Dick Series China (five-piece set). Dinnerware featuring transfer-print pictorial illustrations inspired by Herman Melville's Moby Dick, designed by the traveler, writer, painter, and illustrator Rockwell Kent.
Posted by Shannon at 11:52 AM No comments:

Lyrics Pathetic & Humorous from A to Z 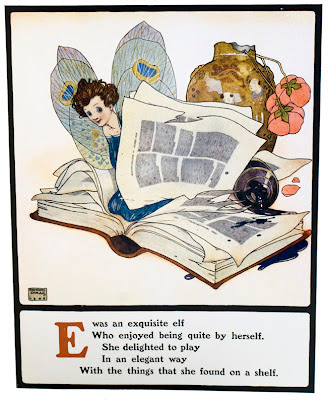 "E was an exquisite elf
Who enjoyed being quite by herself.
She delighted to play
In an elegant way
With the things that she found on a shelf."


In honor of National Postcard Week (until this morning, we hadn't heard of it either, but it runs from May 6-12, 2012), we present a group of brightly colored lithographed postcards showing folk art-inspired images of a romanticized Russia by Ivan Bilibin.


Bilibin first trained as a lawyer, but after traveling through Europe, he became attracted to the art world. He was inspired by the folklore and art of his native northern Russia, and he incorporated these with elements of the Art Nouveau movement. Bilibin became highly successful as a book illustrator, producing a much-beloved series of Russian fairy tales, and later received acclaim as a theatrical designer, working for the Ballets Russes, as well as the Thèatre des Champs-Elysées.


His work often shows local scenes and characters usually surrounded by attractive borders. The scenery is almost as important as the figures and draws on the setting of Old Russia. Through this medium he was able to capture the life and spirit of his fellow Russians.

For more information on all five postcards, please visit our website.
Posted by Shannon at 4:06 PM No comments: