Eric Gill was born February 22, 1882, making today his 132nd birthday. A talented sculptor, typographer, and illustrator, Gill's life was a study in contrasts. A deeply religious Roman Catholic who believed that sexuality was an expression of the divine, and an artist who defiantly characterized himself as a workman in the medieval tradition while his statues, illustrations, and typefaces adorned the modern buildings and pages of his era, Gill unified seemingly opposing ideas in his life and work. In the Introduction to the catalogue of the Humanities Research Center's Eric Gill collection, John Dreyfus writes that "A crystal-clear motive lay behind Eric Gill's most industrious and diversely creative life. He organized his work quite simply as a praise of life-- as a way of giving praise to his maker." 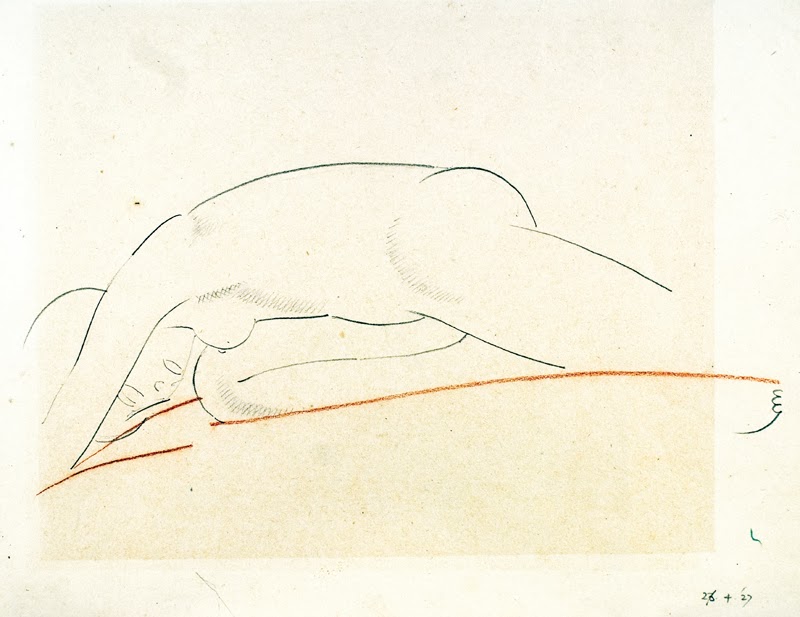 Approaching the practice of art as spiritual work, Gill continually made sketches and studies as part of his method. In her biography of Gill, Fiona MacCarthy notes that the artist came to life drawing fairly late in his career. According to MacCarthy, "He put forward the endearing theory, in the introduction to Twenty-five Nudes, that one could not embark on life drawing any earlier because one did not really know enough about life." His live-in mistresses were his primary models, and this nude study captures the essence of his subject with a few precise curving lines and a hint of shading. Dated April 1927, the drawing was likely done during Gill's protracted vacation stay at Salies-de-Béarn in the Pyrenees from the fall of 1926 through the spring of 1927. There, the Gill family shared a house with Elizabeth Bill, who was Gill's secretary and mistress during this period and who may have been the model for this drawing.

We hope you will join us in celebrating Eric Gill's unconventional life and work, and his enduring contributions to the worlds of art and design.

For more information about Gill's life and art, see Fiona MacCarthy's biography of the artist, Margaret Smith's essay in the Houghton Library Catalogue for the 1994 exhibition Eric Gill: The Cell of Good Living, and The Eric Gill Collection of the Humanities Research Center: A Catalogue, compiled by Robert N. Taylor. Visit our website to view more examples of Gill's work.
Posted by Meredith at 12:13 AM No comments:


Bromer Booksellers will be exhibiting at the California International Antiquarian Book Fair in Pasadena this year from February 7-9. Come by booth 508 to see our excellent display of miniature books, fine printing, fine bindings, illustrated books, and first editions. 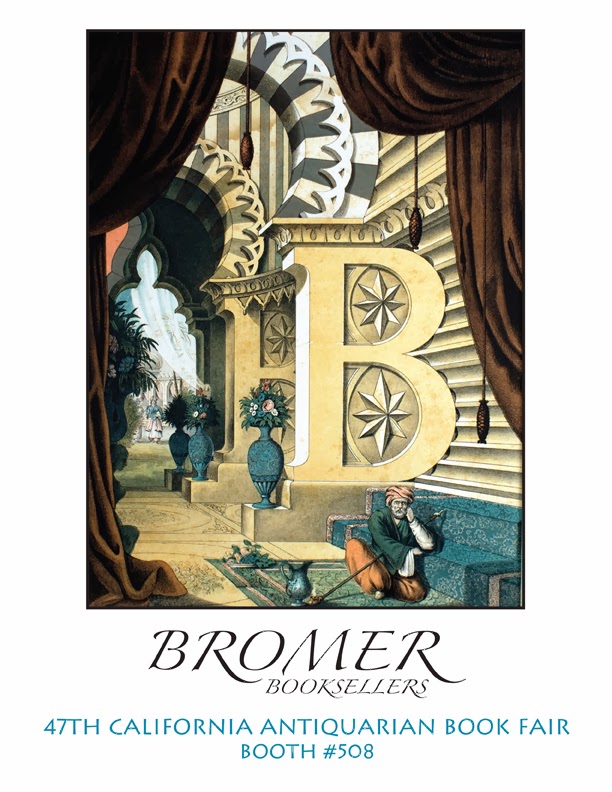 To view a selection of items we will be bringing, download a pdf of our book fair list here, or contact us to be mailed a printed copy.

Among the material we will have on display is a wind-up musical Ombro-Cinéma (see video below), a rare architectural alphabet by Jean Baptiste de Pian, a Book of Hours with extensive dance of death cuts, one of ten copies of the Vale Press Bibliography printed on vellum, and a trade catalogue containing salesman's samples of decorative lids for cookie tins.

Additional details about the fair can be found here. Click here to print a coupon for $2 off admission. We hope you will visit us in Pasadena to explore these and the many other items we will have on offer.

Posted by Meredith at 4:25 PM No comments: