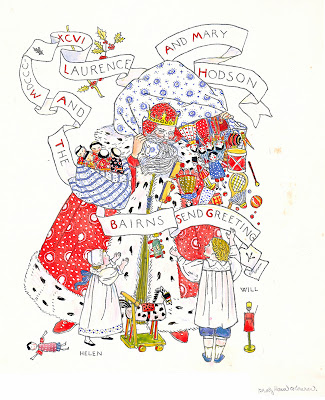 A book is a very personal object. Scanning a person's shelves, one can learn a lot about a person's tastes, including idiosyncrasies and unusual interests. As a gift, a special book speaks eloquently and intimately to the recipient. We display a small sign in the shop, reading "Rare Books make Fine Gifts, Fine Books make Rare Gifts." Being squarely in the middle of the holiday season, we offer a selection of Fine and Rare Books that might appeal to yourselves or those on your gift list.

The recent book Elephant Lullaby from the Kaldewey Press is included. Examples from the Stanbrook Abbey, Vale, Allen presses and Eric Gill are here as well. There are Edward Gorey signed, limited editions, and one of his designed bean bag bats. New acquisitions of children's books and miniature books round out the list.

Please let us know when checking out if your order is a gift that must arrive before a certain date. As always, we thank you for taking the time to peruse our list, and we wish you the happiest of holiday seasons. 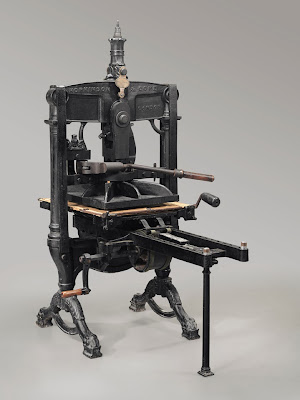 At the 6 December Christie’s auction in New York, Bromer Booksellers purchased the Albion handpress on which William Morris printed his Kelmscott Press masterpiece, The Works of Geoffrey Chaucer. The iron press, manufactured by Hopkinson & Cope in 1891, sold for $233,000, and Bromer was acting as agent for the Cary Graphic Arts Collection at the Rochester Institute of Technology.

“To be a part of this celebrated press’s history is a great honor for our firm,” noted Bromer manager Phil Salmon, who was bidding for RIT at the sale. “This purchase is the logical extension of the sort of synergy between Bromer and the Cary Collection in that each has a strong commitment to preserving and expanding the scope of the book arts.”

Albion No. 6551 is one of the most extraordinary presses in printing history and its remarkable provenance began with its original owner, English designer William Morris, who used the press to print the celebrated Works of Geoffrey Chaucer for his Kelmscott Press in 1896. The Kelmscott Chaucer is considered to be among the most beautiful books ever produced and a major influence on the modern private press movement.

This famed printing press came to the United States in 1924, when it was purchased by noted typographer Frederic Goudy in 1924. Albion No. 6551 resided with Goudy in Marlborough, New York, and it was used to print books under his Village Press imprint. It was then sold to Eden, NY printer Spencer Kellogg, Jr. “From 1932 to 1941, Albion No. 6551 was owned by the Cary Collection’s namesake, Melbert B. Cary Jr., director of Continental Type Founders Association and proprietor of the private Press of the Woolly Whale,” Cary Curator Steven Galbraith explained.

Since 1960 it has been owned by American Printing History Association founder J. Ben Lieberman and his family. During the Liebermans’ ownership, they topped the press with a Liberty Bell, a reminder of the vital role that private presses play in the freedom of the press.

“There is nothing but upside to this purchase,” Salmon explains, “because the press will once again serve an active role in a new century of fine press printing.” Galbraith adds that Albion No.6551 will be “a working press accessible to students, scholars and printers. I look forward to seeing what is produced on the press in the decades to come. I’m certain that the Kelmscott/Goudy Press will be a great inspiration to students at RIT and to others who visit our library’s pressroom.” 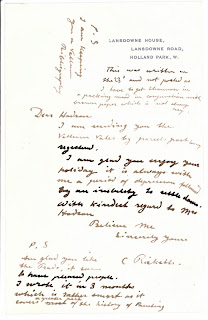 This is the second in a two-part series that started with a post about Charles Ricketts and his Vale Press. This second part is about Laurence Hodson, the recipient of Ricketts' letters, and the multifaceted relationship revealed by the correspondence. 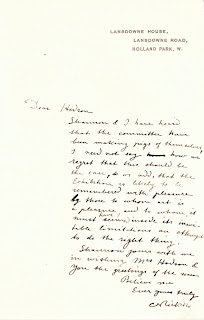 "Shannon & I managed to run down to Wolverhampton the other day. Masefield will probably have told you how charmed we were with the exhibition as a whole & astonished by the excellence of some of the exhibits. I think taken all round it would be difficult to beat the Print or the Book rooms. The small Watts the three Goddesses was a surprise. The Brittomart has improved since it has been varnished or oiled up! I would suggest something in the way of a forged will and a little poison in the small kindly cup of black coffee when the owner is next in your house... P. S. I was greatly struck by the excellence & choise [sic] of the Strang drawings. One of mine I intend getting back out of you that it may be forth with burned very slowly in a very hot fire." - C. Ricketts to L. Hodson, Sept. 20, 1902


Laurence Hodson was a contemporary of Ricketts and Shannon, having lived from 1864 to 1933. Upon his father's death in 1890, he inherited his family's estate in Wolverhampton, as well as a partnership in Springfield Brewery. Throughout his life, he was one of the foremost patrons of the artists and craftsmen of the period, providing financial backing for the Guild of Handicraft, chairing the Fine Art Committee for the Wolverhampton Art and Industrial Exhibition in 1902 (see quote above), and building a large collection of books and art for his personal collection. With Charles R. Ashbee, he founded the Essex House Press in 1898 out of the remnants of the Kelmscott Press, buying the presses and plant and hiring three former staff members from the Press. 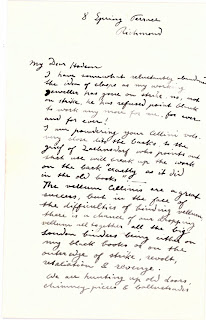 "I have somewhat reluctantly abandoned the idea of clasps as my working jeweler has gone on strike, no, not on strike, he has refused point blank to work any more for me, for ever and for ever! I am pondering your Cellini vols. very close into(?) the backs, to the grief of Zaehnsdorf who points out that use will break up the work on the back 'exactly as it did in the old books'. The vellum Cellinis are a great success, but in the face of the difficulties of binding vellum, there is a chance of our dropping vellum all together all the big London binders being either on my black books or on the outer edge of strike, revolt, retaliation & revenge." - C. Ricketts to L. Hodson, Aug. 23, 1901

Hodson maintained a regular correspondence with many artists, writers, craftsmen, and publishers of the period, not the least of which was Charles Ricketts, from whom he purchased every book published by the Vale Press, including the very limited vellum editions and copies in bindings designed by Ricketts especially for him. Ricketts and he exchanged letters on topics related to the books Ricketts was making, the struggles Ricketts was having with craftsmen, changes to designs, when books were being sent to Hodson, and offers of special edition copies when they were available. 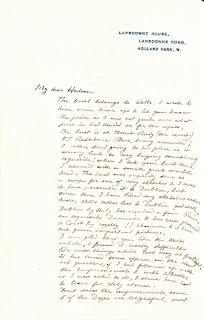 "I am glad that you like the Watts article, I found it beastly difficult like most things which look easy at first sight. It has caused some offence in the New art quarters, if I had followed up with the Impressionists & with Whistler as I was asked to do, I should have had to leave for Italy at once. Don't miss the impressionists, some 5 of the Degas are delightful most of the other things beastly, though many of them entertaining; the movement has been a curious side issue in modern painting Watts being a better impressionist & landscapist than Monet for instance who does interesting spaces of raw paint, on a mechanical scheme, inside monotonous shapes, with a wonderful gift for missing all affect at illusion other than that of a flat painted surface." C. Ricketts to L. Hodson, Feb. 12, 1905


Besides business matters, however, Ricketts' letters also touch on their shared interests, which included art and the art world, and books and the many aspects of their manufacture. He mentions art exhibitions he and Shannon visited, developments in the aesthetics of art, commissions Shannon received from around the world, and art that they had added to their own collection. All this is related in the chatty manner of long acquaintance and friendship.

The letters from Charles Ricketts to Laurence Hodson, along with others from authors and artists who corresponded with Hodson, were found in the back of a wardrobe last year. This happy chance has allowed bibliophiles to rediscover these previously forgotten connections and explore the many sides of these multifaceted relationships.

For more on the letters quoted in this two-part series, visit our website or contact us directly, and as always, we thank you for reading.
Posted by Shannon at 1:31 PM No comments: