The Great Omar and the Modern Renaissance of Jeweled Bookbinding 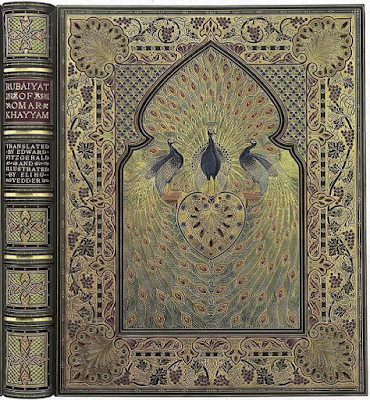 Last week, Anne Bromer gave a thorough and informative lecture before the Ticknor Society on the twentieth-century resurgence of the art of jeweled bookbinding and the twisted saga of The Great Omar. Below is an abridged version of the talk, so that those who were absent can appreciate the story and those who attended can further explore its details.

The Sangorski-bound Rubaiyat of Omar Khayyam, otherwise known at The Great Omar, is the greatest, and possibly only, book to be bound thrice in the same sumptuous manner over an eighty-year period. The first iteration, the true Great Omar, was crafted by the co-founder of Sangorski and Sutcliffe, Francis Sangorski, at the commission of John Stonehouse, the manager of the antiquarian bookseller Sotheran’s, to celebrate the coronation of George V in 1911. It featured 1,051 gems arranged to highlight the upper cover’s three peacocks, the lower cover’s model Persian oud, and the serpent of Eden, skull, and poppy on its interior covers. After a series of setback preventing the book’s direct sale and its shipment to the United States, it finally began its voyage on the ill-fated Titanic. The Great Omar, in its oak casket, was buried on the ocean floor. The second Great Omar met an equally tragic fate. Remade by Stanley Bray according to Sangorski’s original drawings, this instantiation was ruined by the German Blitz of London in 1941, its metal and leather melting the heat from the bombs. In 1989, Bray, at the age of 82, completed the third Great Omar, using the stones that remained from the second. Though this third binding cannot compare in precision or brilliance to its predecessors, it nevertheless marks the mastery of its original designer, the dedication of its reproducer, and the incomparable and consistent artistry of the Sangorski and Sutcliffe firm.

As much as The Great Omar was itself a masterwork, it was also a revival piece. At the founding of Sangorski and Sutcliffe and the inspiration for The Great Omar, jeweled bookbinding had been out of fashion, and thus long out of the artistic realm of bookbinding, for about three hundred years. The style had been popular throughout the medieval period as a symbol of wealth and status. Jewels also adorned the bindings of religious texts, like the Lindau Gospels, as a way of foreshadowing the riches of God’s kingdom and hailing His blessings on earth. Many of these bindings were destroying during the iconoclasm of the Protestant Reformation and the dissolution of the monasteries. This eschewal of the connection between luxury and religion, compounded with the shift in taste from jewels to velvet, embroidery, pearls, and silk bindings, the art of jeweled bookbinding fell by the wayside.

Whereas medieval jeweled bindings frequently used large gems in simple geometric layouts, Sangorski and Sutcliffe’s designs relied on their deliberate integration of the stones into an intricate motif. Their rival, the firm of Robert Rivière and Son, challenged Sangorski and Sutcliffe in this modern style subtle thematics. Rivière and Son’s master calligrapher and miniaturist was Alberto Sangorski, Francis Sangorski’s brother. Two of Alberto Sangorski’s pieces, Keat’s La Belle Dame Sans Merci (21406) and Poe’s Annabel Lee and Other Poems (21734), dazzle the eye with carefully set gemstones surrounding and embellishing the authors’ initials. Their interiors are no less splendid, featuring calligraphy, miniatures, and illustrations all completed by Sangorski’s hand. They, like The Great Omar, are incredible bindings on incredible books. 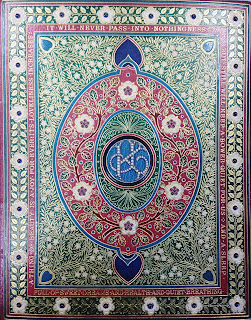 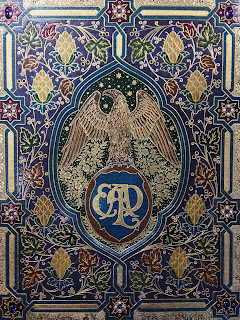 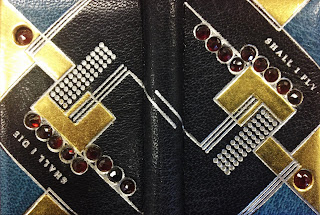 The art of jeweled bookbinding continues today, albeit in small pockets of the bookbinding world. Shepherd’s Bookbindery recently recreated the first Sangorski and Sutcliffe jeweled binding, a copy printed on vellum of Epithalamion & Amoretti. Other examples pop up in miniatures, which are perhaps less costly but certainly more intimate and needful of surer hands than “full-size” volumes. An excellent example is Derek Hood’s binding on the miniature Shall I Die? Shall I Fly? written by Shakespeare and published by Anne and David Bromer. Following the tradition begun by Sangorski and Sutcliffe, it artfully incorporates twenty garnets into a larger motif of cubist question marks, complementing the indecision of the text. The art of jeweled bookbinding, far from lost, is primed for a second revival.