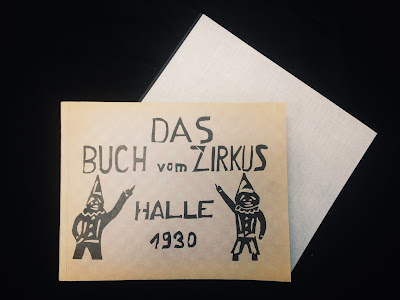 One of the greatest influences of the Bauhaus artists extended not from their own designs, but through the ambitions of their students. Among these, Hans-Friedrich Geist was particularly ardent, devoting his life to teaching art to children and encouraging their intrinsic creativity. He was especially entranced with the works of Paul Klee and Josef Albers, and sat as a guest student in their masterclasses. A teacher from the age of twenty-one, he taught in Altenburg, Meuselwitz, Halle, and Lübeck. He quickly established himself as one of the most prominent and progressive art educators in the Weimar Republic, eventually becoming the artistic director of the Overbeck Society. His contributions were acknowledged in a 2006 exhibition hosted by Meisterhaus Schlemmer in Dessau, Germany (appropriately in a very Bauhaus building), which displayed works Geist’s students created during his tenures in Meuselwitz and Halle. 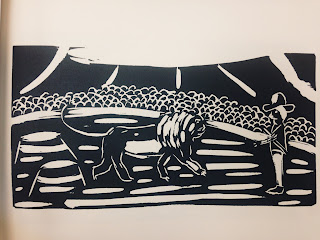 Our recent acquisition of a publication of children’s illustrations hails from this era of Geist’s career. Das Buch vom Zirkus features twenty-eight full-page original linocuts created by Geist’s twelve- to fourteen-year-old students at the art academy in Halle. Each illustration presents a scene from the circus, including a lion circling its trainer, clowns playacting for the audience, and trapeze artists swinging from the ceiling. 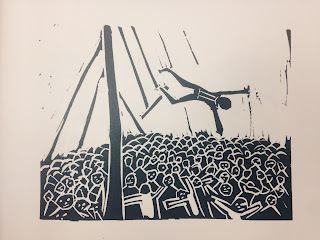 The circus was a popular theme among the Bauhaus artists. Laszlo Moholy-Nagy particularly espoused the motif as an extension of the theater, as a means of intertwining contrasting relationships, such as the tragicomic or the trivial-monumental, to critique societal needs and “[eliminate] the subjective.” Xanti Sandinsky’s pantomimes exemplified Moholy-Nagy’s perception of the circus, pitting tamers against beasts and setting singing and dancing women against colorful backdrops. While Das Buch vom Zirkus is not nearly so refined in its approach, it is a stunning example of Bauhaus early education and the importance of production and publication to the movement.