Senator Kennedy and His Glasses 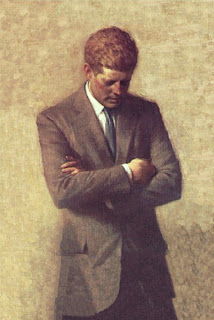 Despite his youthful and robust image, John F. Kennedy (1917-1963) was ill and in pain for most of his life. He suffered from Addison's Disease, which was not diagnosed until he was 30, and the resulting abdominal discomfort he endured was treated with corticosteroids as early as 1937. The effects of prolonged use of corticosteroids were unknown at that time, and Kennedy's treatment resulted in osteoporosis and degeneration of the bone in his lower back. By 1954, he had endured fourteen years of chronic and increasing back pain, despite medication, back exercises and manipulation under anesthesia, a back brace, and surgery. Finally, his pain had gotten so bad that he could not bend or climb stairs without crutches. His fifth lumbar vertebra had collapsed, and in October of 1954, while Senator of Massachusetts, Kennedy underwent surgery in New York to hopefully repair the damage.

Due to the hormone treatments Kennedy was receiving for his Addison's Disease, his immune system was compromised, and the surgery was extremely dangerous. Prior to that time, few, if any, patients with Addison's Disease had survived surgery. Indeed, after the surgery, Kennedy contracted a urinary tract infection, went into a coma, and was so close to death that he received Last Rites. Nevertheless, he had recovered enough by December to move to his family's home in Palm Beach, Florida. It was there that both he and Jacqueline Kennedy sent letters to their friend and Senator Kennedy's aide, Robert F. Morey, thanking him for checking on "Jack's" progress in New York and sending Kennedy a pair of glasses.

Robert F. Morey (1913-1996) was born in Charlestown, Mass. and was a prize fighter and shipyard electrician before becoming John F. Kennedy's chauffeur. He worked on Kennedy's 1946 campaign for the U.S. House of Representatives and became his aide when Kennedy won a seat in the Senate in 1953. Morey was also an artist, and he encouraged both John and Edward Kennedy to paint, often painting with them. In 1961, Kennedy named Morey U.S. Marshal for Massachusetts, and in 1969, Morey's design was chosen over twenty others to become the official seal for the U.S. Marshals Service, a design that is still in use today.

Morey was working in Kennedy's office in the Federal Building in Boston when he received the Kennedys' letters from Palm Beach. Senator Kennedy's letter was a form letter on United States Senate letterhead and dated January 7, 1955. It is mostly typed, with a hand-written signature and note at the bottom of the page. The letter reads:

Many, many thanks for your kind message
to me when I was in the hospital in New York. Hospitals
are gloomy places, I am afraid; and it makes a tremen-
dous difference when friends remember you as you did.

I am feeling much better and am looking forward
to getting back to Washington around the first of March.
Perhaps then I will have a chance to thank you again in person.

Until then, Jackie and I want to wish you and
all your family a very happy and successful New Year.

[Written] Many thanks for the glasses.
Hope to see you soon.


Jacqueline Kennedy's letter is entirely hand-written, signed simply "Jackie," and includes the envelope addressed by her and postmarked January 13, 1955. The letter reads:

That was so kind and thoughtful
of you - to send Jack those glasses
in the hospital - and you can't imagine
how touched [he] was at your going to all
that trouble - or what a terrific help
they were. I never knew such things
existed - and they made all the difference
in the world as he would have gone
mad just lying there staring at the
ceiling not being able to read.

So many many thanks Bob - and
a very happy New Year from us
both.

It is unclear what sort of glasses Morey sent, but, as Jacqueline Kennedy stated, they helped Senator Kennedy read while in the hospital in New York, and it was during this time that he wrote his Pulitzer Prize-winning book, Profiles in Courage.

Kennedy's back troubles did not go away because of his 1954 surgery. In February 1955, he had surgery again, this time to remove the metal plate that had been inserted the previous October, which had caused an infection. Despite his hope of "getting back to Washington by around the first of March," Kennedy did not end up returning to work until May. Even then, his back pain remained and persisted for the rest of his life.

As a result of his long absence from Congress, some of Kennedy's health problems were finally revealed to the public, something he and his family had worked hard to avoid throughout the years. However, the surgery and recovery period were spun as isolated events that did not affect his overall health. The public did not learn about his chronic ill health and Addison's Disease until many years after his death, and for the rest of his presidency, Kennedy remained a symbol of youth, vigor, and robust good health.

For more information about the Kennedys' letters to Robert F. Morey, please visit our website. For more about John F. Kennedy's health problems, see this article from The Atlantic or this website. Thank you for reading, and Happy President's Day.