A Brush With Fame

The Academy Awards are this weekend, and six of the Best Picture nominees are adapted from books. Take a look at this gallery of other Oscar-nominated books-turned-movies currently in our stock, and enjoy rubbing shoulders with true celebrities. 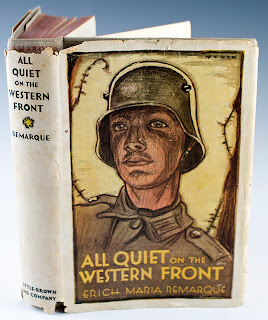 All Quiet on the Western Front, by Erich Maria Remarque. First American edition, translated from the German and published in 1929. This is the first novel published by the author. It is based on his own experiences as a young soldier in the first World War, and it stands as one of the most powerful works of anti-war literature ever written.

The book was adapted for the screen in 1930 and nominated for four Academy Awards, of which it won Best Picture and Best Director. 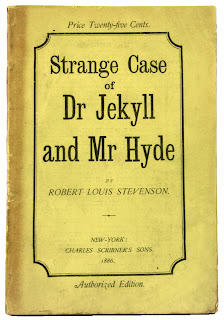 Strange Case of Dr. Jekyll and Mr. Hyde, by Robert Louis Stevenson. First edition, published in New York in 1886, and preceded the London edition by three days. In the scarce original yellow wrappers. 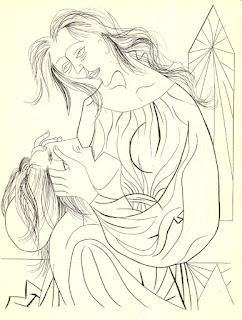 L'Histoire Tragique de Romeo Montecchio & Giulietta Capelletta, by Matteo Bandello and published in 1947. From an edition of 242 copies, this is one of twenty-five copies with extra suites of the surrealist engravings and chapter headings, illustrated by Mario Prassinos. Bandello's tale, which was a principal source for Shakespeare's play, has been translated into French by Michel Arnaud.

Unfortunately, we do not have a first edition of Shakepeare's The Most Excellent and Lamentable Tragedie of Romeo and Juliet, but we do have this translation of the story upon which Shakespeare based his tragic romance. Shakespeare's work has been adapted for the screen many times, earning Academy Award nominations in 1936, 1968 (winning for Best Cinematography and Best Costume Design), and most recently, in 1996 for Baz Luhrmann's Romeo + Juliet. 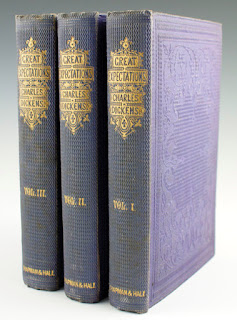 Great Expectations, by Charles Dickens. First edition, first impression, published in 1861. One of 1,000 copies. Widely acknowledged as Dickens's masterpiece, Great Expectations was one of only two novels not published in monthly parts and published without illustrations, and it is the rarest of Dickens' larger books in that most of the first edition was purchased by libraries; those copies that survive, therefore, are usually not in good condition. This copy is fine in publisher's bright violet cloth.

There have been several film adaptations of Great Expectations, but only the 1946 version was nominated for and won Academy Awards. It was nominated for five awards and won for Best Art Direction and Best Cinematography. 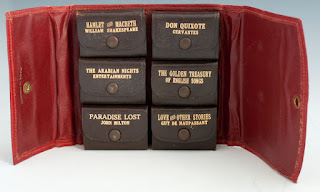 The Marvelous Miniature Library, published c. 1925. A collection of classic texts, including Hamlet and Macbeth by William Shakespeare, and others, issued in a gilt-titled leather wallet-style binding, with snap closings, and housed in a gilt-titled snap-closed leatherette case. Each volume measures 2 1/8 by 1 9/16 (55x39mm).

As mentioned above, we do not have any first edition Shakespeare, but here is an interesting presentation of two of his works, which certainly takes up less room than a First Folio. In the movies, Hamlet has appeared frequently, garnering eleven nominations and winning four Oscars for the 1948 version, including Best Picture and Best Actor. Macbeth has also been adapted many times but has yet to receive an Oscar nomination. 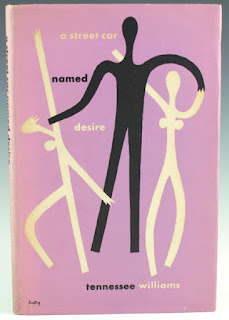 A Streetcar Named Desire, by Tennessee Williams. First edition, published in 1947. This is Williams's most famous play, which won the Pulitzer Prize for Drama the year it was published.

Williams also wrote the screenplay for the 1951 film, which garnered fame equal to (and perhaps surpassing) that of the original play with defining performances by Marlon Brando and Vivien Leigh. However, many of the more sensitive aspects of the play, such as Blanche's rape and references to homosexuality, were altered or omitted in order to comply with the film industry's censorship codes. Nevertheless, the film was nominated for twelve Oscars, including all of the major categories, and won for Best Actress, Supporting Actress, Supporting Actor, and Art Direction. 27 Wagons Full of Cotton and Other One-Act Plays, by Tennessee Williams. First edition, published in 1945. Contains eleven one-act plays by the master of modern drama.

27 Wagons Full of Cotton was adapted into the film Baby Doll in 1956 and garnered four Academy Award nominations, such as Best Actress and Best Adapted Screenplay. 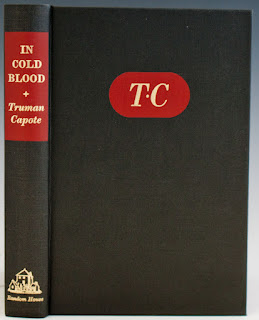 In Cold Blood, by Truman Capote, published in 1965. One of 500 numbered copies signed by the author, printed on special paper, and specially bound in full black cloth. The story of the brutal murder of a Kansas family by two robbers is considered perhaps the greatest work of the New Journalism movement, which sought to incorporate literary techniques into journalistic reportage. Its most notable practitioners, in addition to Capote, were Norman Mailer, Hunter S. Thompson, and Tom Wolfe.

In Cold Blood was adapted for the screen in 1967 and received four Oscar nominations, including Best Director and Best Adapted Screenplay. 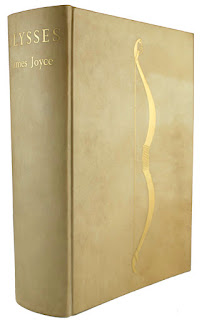 Ulysses, by James Joyce. First edition printed in England in 1936. From an edition of 1,000, this is one of 100 copies signed by Joyce and specially bound in full calf vellum with gilt bow design on the front cover by Eric Gill. The text for this edition follows the second Odyssey Press edition. The ban on Ulysses was overturned in the United States in 1933, but British printers were still initially hesitant about publishing the book, fearing legal consequences. However, Joyce sensed that attitudes in England would soon change, and this edition was printed in Britain three years after that landmark decision. Following the text is an appendix with information about the trial and Judge John M. Woolsey's decision to lift the ban.

A film version of Ulysses was not made until 1967, and it is notable for how closely it follows the original text. It was filmed in Dublin, and most of the lines of the script were drawn directly from the book. Even three decades after the close of the obscenity trial, however, the film itself was censored, receiving an X rating in Great Britain and appearing at Cannes with unauthorized cuts in the French subtitles. Nevertheless, the film was nominated for Best Adapted Screenplay at the Academy Awards, in direct competition with In Cold Blood (the award went to A Man for All Seasons). 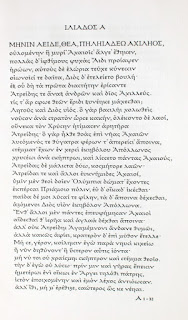 Ilias and Odusseia (The Iliad and The Odyssey), by Homer. Printed at the Bremer Presse between 1923 and 1924. Two volumes, each one of 615 copies printed in Greek with titles by Anna Simons.

Perhaps there is no such thing as the "first edition" of the Iliad and the Odyssey, but there have been many editions over the years and a multitude of translations. This edition is in the stories' original Greek language, and is beautifully printed. The epic poem, The Odyssey, has influenced numerous other works since its inception, in every facets of the arts, including Joyce's Ulysses, above, and the movie O Brother Where Art Thou, which was nominated for two Academy Awards in 2000.


If you would like any more information on the titles listed here, please visit our website. We hope you enjoyed this brief brush with celebrity, and we thank you for reading.
Posted by Meredith at 3:39 PM