Featured Item of the Week: Zoetrope, "The Wheel of Life" 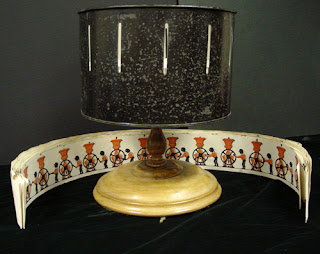 In honor of our latest E-catalogue, Oddballs, this week's featured item is an object that often elicits curiosity from those who visit our shop: the zoetrope. This nineteenth-century optical toy was a popular form of entertainment before the advent of cinema and television, and still continues to fascinate viewers today. 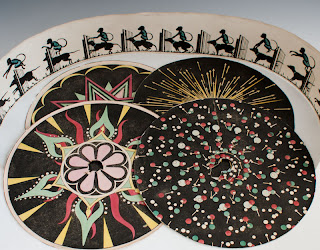 Our zoetrope, titled "The Wheel of Life," was produced by the London Stereoscopic & Photographic Company around the 1870s. The first modern zoetrope was designed by W. G. Horner in Bristol, England in 1833. He called it a "Daedalum," after the inventor and architect of Greek mythology, Daedalus. Zoetropes gained popularity around 1860 when the concept was patented in France, and then spread to the United States, where they were patented by Milton Bradley.

Along with flip books and thaumatropes, the zoetrope was a step towards the development of film and television. The zoetrope is comprised of a metal drum with evenly-spaced slots all around it. The drum is mounted on a spindle on a wooden base, which allows it to spin freely. The slots on the side of the zoetrope create a stroboscopic effect, in a similar manner to the shutter of a movie projector. The viewer looks through the slots while spinning the drum, creating the illusion of animation or continuous motion. This sense of movement is created by an optical illusion known as the Phi Phenomenon: the brain creates relationships between images seen close together and fills in the gaps, allowing us to perceive smooth, constant movement instead of a sequence of images.


As Blair Whitton writes in his book Paper Toys of the World, "The variety of designs of figures and animals that were produced for the zoetrope strips are a fascinating study in themselves. Some display the movements of dancers, jugglers, circus performers, boxers, all with a comic theme." Our zoetrope includes fourteen color-printed strips depicting silhouette figures (both human and animal) performing acrobatic feats: a dog catches a ball in its mouth, a gymnast does flips, and a frog juggles a ball on its hind legs. A few of the strips, one of which can be seen in the video below, feature stereotypical depictions of blackface characters, evoking minstrelsy as part of the theme of entertainment. Also included are four rare round sheets for the bottom of the drum, which are printed or hand-colored with bright, kaleidoscopic, carnival-inspired designs.

If you cannot come and visit us in Boston to experience the zoetrope for yourself, give it a virtual whirl by clicking on the video below. For more information on the zoetrope and our other optical and paper toys, please visit our website. Thank you for reading, and we look forward to sharing another item with you next week.