My Tiny Alphabet Book in The Microbibliophile 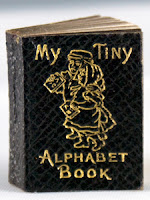 An article written by our very own Shannon Struble appeared in the January issue of The Microbibliophile, a bimonthly journal about miniature books and the book arts. The full text of the article, discussing Bryce's My Tiny Alphabet Book, appears below. We hope you enjoy it!

Louis Bondy wrote of David Bryce: “His contribution to the totality of miniature books has been of the greatest significance and we do not hesitate to describe the Glasgow publisher as a giant towering over the world of dwarf books” (p. 116). Bryce published miniature books on a variety of topics, including language, religion, literature, the sciences, and more. When one thinks of the publishing house of David Bryce and Son, what comes to mind is usually his “Smallest Bible in the World,” set of Shakespeare, Koran, or even his Scotland-themed books, such as the Burns’ Family Bible. What is not so well known and does not fit so easily with Bryce’s other miniature publications is the children’s book My Tiny Alphabet Book (1 1/8 by 7/8 inches), issued around 1900.

As the title suggests, it is an ABC book containing two separate alphabets, “Tiny Alphabet of Animals” and “Tiny Alphabet of Birds,” each with its own title page and followed by a page of numeric figures and arithmetic problems. Both alphabets are delightfully illustrated with pictures of representative animals and birds, 52 in total, and printed using color lithography. Bromer and Edison note that this volume “held the distinction of being the smallest book printed in color to that time” (p. 131). 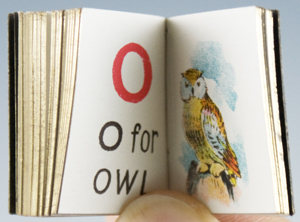 Unlike many Bryce publications, which were usually reduced versions of larger works, Spielmann indicates that My Tiny Alphabet Book was created specifically to appear in miniature format (no. 489). Bryce advertised the book as part of the Mite Series, and it was listed in the contents of Bryce’s Bijou Bookcase, along with other volumes from the Mite, Thumb, and Pearl Series. There is some variation of bindings, but the one described most often is gilt-stamped red leather, often with an advertisement for Mellins Food on the lower cover. Some copies have a boy and a girl holding ABC books within the title “My Tiny Alphabet Book” on the front cover, while Bondy notes that others “show a horse and a bird in flight on both covers” (p. 72). The version examined for this article is bound in black leather with only the boy and the girl stamped in gilt on the front cover. 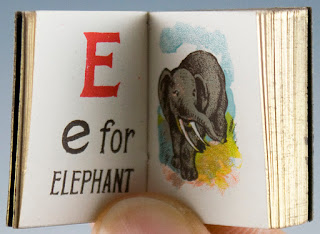 Bryce published additional books for children, but no others that fit the standard definition of a miniature book, that is, measuring less than three inches. In addition to a collection of folklore aimed at children that was just over three inches tall, Bryce issued religious and moral tracts and instructional texts, all between 24mo and octavo in size. It is unclear how popular My Tiny Alphabet Book was with children; however, if there is one thing small people seem to consistently like, it is other small things, including books. Even when they are not able to read them, or when they are just starting to learn their ABCs, children like to hold tiny books in their hands, look at the text, and especially look at the illustrations. Perhaps it is a sense of shared affinity, as if the miniature books were made just for them, or the novelty of interacting with something on their scale in a world sized to adults, but children seem to connect with miniature books on a level that they might not experience with full-sized books. For this reason, it makes sense that publishers like David Bryce and Son would produce miniature, or near-miniature, books especially for children, and that those books would be read and well-loved by the young minds for which they were produced.

Our thanks to Jim Brogan for permission to post this article here. The Microbibliophile is an excellent journal that publishes news about miniature books, miniature book publishers, and the book arts and related events. It is available from Mr. Brogan for a yearly subscription of $36 (in the US) or $7 for a single issue.