Featured Item of the Week: Ebru Papers by Hikmet Barutçugil 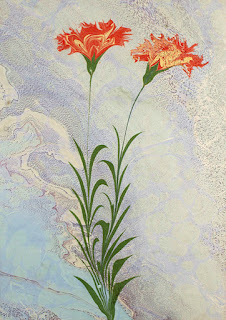 This week, as we begin what is traditionally one of the coldest months of the year in Boston, I would like to share a hint of spring. We have a small selection of colorful Ebru papers from Turkey by one of country's leading contemporary artists, Hikmet Barutçugil. Two examples, titled "Efsun Çiçegi" (Enchanting Beauty Flowers), are part of his series "Efsun Flowers," which was inspired by his wife, Füsun Hanim. This particular style of Ebru is known as Necmeddin Ebru, or "Flowery Ebru," was developed in the 20th century and is named after its creator, master marbler Necmeddin Okyay. Drawing on this tradition, Barutçugil developed his own technique for creating flowers within his marbled patterns. 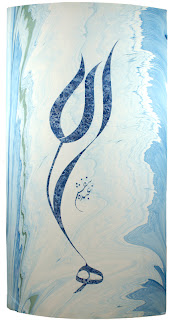 Ebru, or marbling, is one of the oldest arts in Turkey. The earliest example found, thought to be from 1447, is held in the Palace of Topkapı. The art form traces its origins to Iran, and the name Ebru has its roots in the Persian words "Abru," meaning the surface of water, and "Ebri," which means cloud. To create Ebru, colors are floated on the surface of water thickened with sizing. Patterns can be created by dropping mineral pigment dyes onto the sizing, or by manipulating the colors using rakes, combs, or brushes in order to create intricate designs (view a video of this process here). 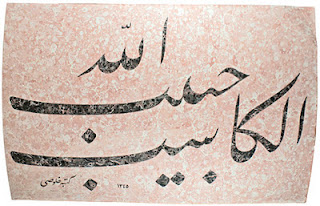 In contrast to Western paper marbling, which is used primarily in book binding and design, Ebru was often used as a background for calligraphy and can be considered high art. Ever since its fifteenth-century beginnings, artists in Turkey (and around the world) have experimented with Ebru marbling in order to create increasingly complex designs, which are works of art in their own right. 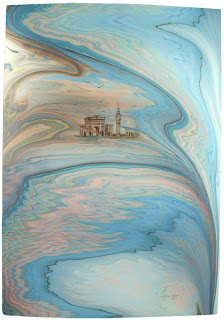 Hikmet Barutçugil has turned his historic Turkish mansion into a workshop and cultural center, using the house itself to showcase his art. Everything, from the draperies and decorations to the ceiling tiles, is marbled, highlighting the versatility and beauty of Ebru. In this inspirational environment, Barutçugil offers classes in Ebru and other traditional Turkish-Islamic arts in order to perpetuate and renew these arts for future generations.

To view other examples of Ebru marbling, please visit our website. Thank you for reading, and we look forward to sharing another item with you next week.
Posted by Jessica at 4:22 PM