In the past, we have briefly mentioned Edward Gorey and particular books we have had for sale that were written and/or illustrated by him. While he was alive, Bromer Booksellers published two miniature books written and illustrated by him, and we are always excited when new Gorey items come in because we are fascinated by his macabre sense of humor and unique illustrative style.

Some of our favorite Gorey items are the bean bag toys. The Goreyana blog has an interesting series of posts about Gorey's "Stuffed Creatures," which fall into three categories: those created and sewn by Gorey himself, those designed by Gorey and produced commercially, and those sewn by fans based on Gorey's creations. We have had items that fall into the first category in the past, such as figbash dolls, which Gorey used to sew at his Yarmouthport home while watching the soap operas he loved. We currently have an example of a commercially produced Gorey design in this Bat, which was distributed by Toy Works in 1980 as part of a series of characters designed by Gorey. 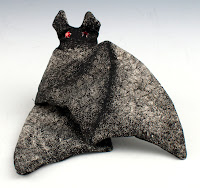 The bat is made of fabric printed with Gorey's typical cross-hatching that creates areas of lighter and darker shadows across the bat's body. The wings are sewn to simulate the finger bones in real bat wings, and the body is stuffed with beads. As a final touch, the eyes are created with red rhinestones.


As denizens of the night and associates of its more supernatural dwellers, bats appear frequently in Gorey's work. They are flying in the background of his illustrations, and his distinctive bat wings are prominent in The Gilded Bat, a book about the rise and fall of a ballerina, and in the stage production of Dracula he designed. A bat motif runs throughout the set decorations and costumes, and Dracula's cape itself has the appearance of bat wings. Gorey himself even supported Bat Conservation International Foundation, an organization that protects and restores bats and their habitats.

Since his death, Gorey's bats have proliferated, appearing as jewelry, stamps, wallpaper, clothing, tattoos, hanging mobiles, and more. Clearly, Gorey's love for and interest in bats has transferred to his fans through his work. We hope you find Edward Gorey and his work as fascinating as we do and keep an eye out for new Gorey items on our website, bromer.com.
Posted by Meredith at 4:02 PM