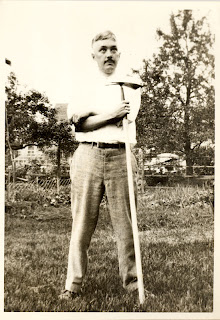 In preparation for the Boston International Antiquarian Book Fair (more on that tomorrow), we have set up a display in our shop devoted to one of the greatest graphic designers of the twentieth century: William Addison Dwiggins. Dwiggins is credited with coining the term "graphic designer," and besides his work for Alfred A. Knopf, he also had his own press with Dorothy Abbe, called Püterschein-Hingham. 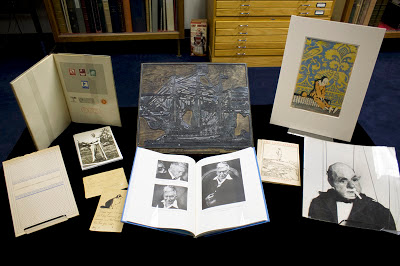 Our collection (above) includes materials Dwiggins designed for Knopf and Püterschein-Hingham, an essay he wrote on the atrocities of the present design of currency and postage stamps, manuscript material, and the original zinc plate for a creative exercise Dwiggins called a "Graphic Response to Verbal Stimuli." At the center of the display is Strings Attached, a book by Anne Bromer about Dorothy Abbe, who partnered with Dwiggins at Püterschein-Hingham and was one of his most important collaborators. 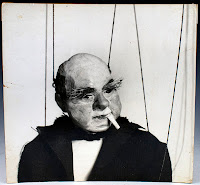 Dwiggins was also very interested in marionettes, and he took on the role of director, carved the figures, and designed the stages, scenery, costumes, and lighting for his productions. A photograph of one of his marionettes, modeled after F. Morton Smith, a Boston lawyer who was a friend of Dwiggins, is part of the group, as is a photograph of Dwiggins himself (seen above).

Rounding out the group is a woodcut illustrating Stravinsky's ballet Petrouchka, printed by Dorothy Abbe from a wood block cut by Dwiggins. We liked this image so much that we used it for the front cover of our most recent print catalogue (available here).

To view more items associated with W. A. Dwiggins, visit our website and search for "Dwiggins" in the search bar on the left. Stay tuned for tomorrow's post, where we will outline our events for the weekend of the Boston Book Fair.