Bromer Booksellers is the leading specialist in miniature books, and whenever they are on display, the tiny volumes measuring under three inches always attract quite a bit of attention. People are often curious as to why someone would create books so small. One answer to this question is revealed in the history of the miniature books pictured above.

Among the smallest of our miniature books is this set of three leather-bound volumes published by the Kingsport Press, comprised of the Addresses of Abraham Lincoln (1929), Extracts from the Autobiography of Calvin Coolidge (1930); and Washington: His Farewell Address (1932). Measuring a mere 7/8 by 5/8 inches, the books are smaller than postage stamps; the Addresses of Abraham Lincoln was proclaimed "the smallest book in America" upon its publication.

The Kingsport Press was established in Kingsport, Tennessee in 1921 and grew to be one of the largest book manufacturers in the nation, attracting visitors from across the country. According to a letter to Percy Spielmann, the collector and bibliographer of miniature books, from the president of the Kingsport Press, when the Press first came to Kingsport, the people in the surrounding community who would potentially become the Press's employees, didn't have experience working in the graphic arts industry. Realizing that the company needed to train local people to be typesetters, platemakers, printers, and binders, and aware that a traditional apprenticeship program would not be feasible, the Press set up its own school for all new employees, known as the Kingsport Press Training Division. 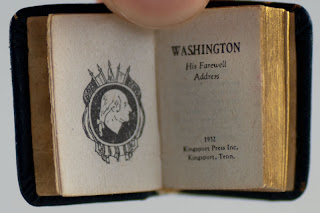 In order to graduate, students were required to create a piece that demonstrated their mastery of the program. One student chose to create a miniature book as a final project, which attracted the attention of the Press's management. They thought that the miniature book could be used as a clever way to generate publicity, and a creative form of advertising. As a training exercise, the students of the Training Division produced an edition of 150 books of Lincoln's addresses for the company to distribute without any charge. In 1928, the students sent an exhibit of the book to the Employing Bookbinders of America convention in Boston, which won the prestigious first prize. The miniature book was also featured in several Graphic Arts trade journals at the time. These ventures were very successful in drawing attention to the Press and showcasing the skill of its employees. 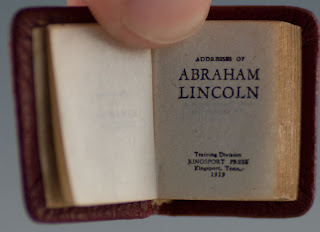 An incredible amount of patience and work went into creating these books. The president of the Press describes all of the steps involved in the making of these tiny books in great detail in his letter to Spielmann. According to the president, "The making of a miniature book, which is just slightly more than half of the standard 7/8" x 1" postage stamp, starts in exactly the same manner as the manufacture of a standard book." The text was first set in 7-point Cushing type, which is smaller than what is normally used for the average book. However, after the pages were printed, the most perfect impressions were selected and sent to the photo-engraver, who reduced the text to miniature size. The sheets were folded using special hand-operated machines and then gathered, sewn, glued, and trimmed. They were bound in the same manner as full-size books, using leather and gilt decoration. The Press even invented and manufactured its own small gilding press to be used for the miniature books.

Because of the challenges inherent in working on such a small scale, making miniature books is a perfect training exercise for the production of full-size books. If a person shows the dexterity and skill necessary to print and bind a book that measures less than an inch, he or she is certainly well-qualified to work on full-size books. In the letter to Spielmann, the president of the Press writes, "The little book has proved to be a rich mine of experience for the students. Its size has emphasized rather than minimized all of the problems of book techniques and the noble text has been an incentive to the highest endeavor." He also writes that although the choice of Lincoln's addresses for the first book was mostly by chance, "Since then the appropriateness of the choice has been apparent to all...no author using the English language has ever excelled Lincoln in putting large amounts of human feeling within the compass of a few words."

The Kingsport Press incorporated the making of miniature books into their curriculum, and students from the Training Division produced the three miniature books in this set in 1929, 1930, and 1932. Today, miniature books are still approached as a challenge to book artists and are a true testament of their skill.

For more information on these and other miniature books, visit our website. Thank you for reading, and we look forward to sharing another item with you next week.