E-catalogue 23: The Ides of March 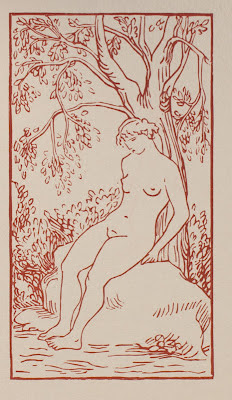 If it weren't for Roman history and Shakespeare, there would be nothing ominous about the Ides of March. Its etymology is innocuous enough: it simply means the middle of March. However, the events of this day in 44 B.C. forever changed the language used in association with it. We would like to mark the middle of March by highlighting Classical literature, or works that have been inspired by Latin and Greek writers. This includes fine press printers who have been enticed by the challenge of designing Classical texts, from Giambattista Bodoni, whose vast oeuvre includes a handsome edition of Anacreon in Greek, to the Officina Bodoni, which often produced original texts and their translations in the same work. Many book illustrators have also found inspiration in Classical texts, including the French Catalan sculptor Aristide Maillol, who embraced a simpler line in his Odes of Horace, and Georges Barbier and Jean-Francois Schmied, whose Les Chansons de Bilitis is widely considered an Art-Deco highspot. As with Caesar's walk to the Theater of Pompey, books also have their destiny as Terentianus reminds us: Habent sua fata libell.


View the e-catalogue here
Posted by Meredith at 4:32 PM