E-catalogue 31: The World in the Woodgrain 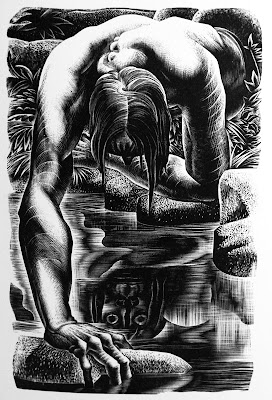 The woodcut has been with the western world since the early 15th century, and its rise as a popular form of the visual arts can be at least partially attributed to the ease with which woodcuts could be printed side-by-side with text composed from movable type. As a result, the woodcut, and its kissing cousin, the wood engraving, were the only media for illustrating printed books until the late-sixteenth century, after which point techniques developed for engraving on other surfaces--stone, copper, then steel--offering alternatives that displaced the humble woodcut.

Yet, the process of transferring images to paper via a carved block of wood managed to bounce back, enjoying revivals as recently as the mid-twentieth century. Its resilience is perhaps the result of a level of expression that can be teased out of a woodblock's positive and negative spaces. It is an attempt to illustrate this wide range that lies behind our latest e-catalogue.

It was Albrecht Durer who raised the woodcut to the level of art form in the late 15th century. We offer here a choice example of his single leaf cut depicting the circumcision of Christ. Several decades later, Geoffrey Tory explored the dramatic potential latent in the block in the black figures in his Parisian Book of Hours from 1527--figures that included death riding a black horse.

Toward the close of the 18th century, and into the early 19th century, woodcuts and wood engravings made something of a comeback as they proved to be an economical way to illustrate children's books. Popular cuts produced by commercial artists were widely reused in a variety of chapbooks, of which we have many examples on offer. Well-known artists such as Thomas Bewick and his younger brother John also illustrated works for juvenile audiences.

With the renewal of interest in craftsmanship that characterized the Arts and Crafts movement at the end of the 19th century came a renaissance in book illustration, and once again the woodcut and wood engraving were the media of choice. Modern illustrators such as Eric Gill, John Buckland Wright and Lynd Ward pushed the expressive boundaries of the wood block further, rendering dramatic, sensual images.

We hope you enjoy this selection, and we wish our customers, colleagues, and friends a very Happy Holidays.
Posted by Meredith at 4:25 PM