E-Catalogue 28: The Allure of Provenance 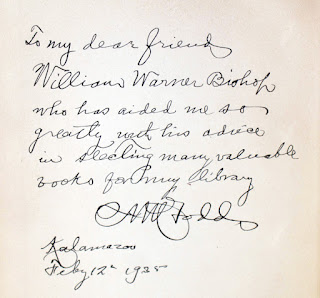 Among the attributes that make books appealing as collected artifacts is the fact that some of them can boast a significant previous owner. Many of these owners quite literally left their mark on the books they once owned: some affixed bookplates or tasteful leather booklabels; others simply wrote their names; and still others were close enough to the author to receive a copy of the book inscribed to them. 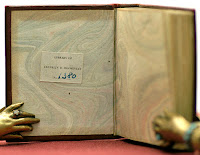 For this e-catalogue, we have gathered over thirty books whose provenance has been established, either through a bookplate or label, or an ownership or authorial inscription. We were quite pleased with the diverse group of previous owners we found among our shelves. FDR, for instance, was an avid collector of miniature books, many of which were given to him by Eleanor; and while these seldom appear on the market, we have his copy of The CompleatAngler, which bears both of their initials, as well as his bookplate.

Moving from presidents to popes, an inscription can be a subtle nod to biography, as can be seen in the Italian edition of the handsome Officina Bodoni Four Gospels inscribed by Pope Paul VI to the former mayor of Milan -- a connection that becomes clear when one learns that before ascending to the Papacy, Paul VI served as the Archbishop of Milan.

Above all, these ownership markings deepen the stories of the objects, enhancing their appeal. We hope you will find some of these stories compelling.
Posted by Meredith at 5:03 PM