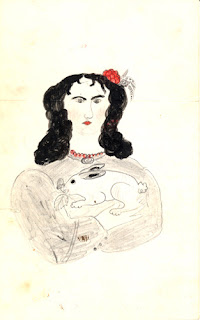 One of the reasons the Iliad and Odyssey continue to be relevant after 4000 years is because they depict the lengthy, fraught process of going to and returning from war. It is a process, to be sure: from the moment Iphigenia is sacrificed (all part of a mythology with which Homer's audience would have been familiar), the innocence of that society was lost. Achilles, he of the legendary brooding and rage, knew he could not return to life before; and Odysseus had to undergo a gradual shedding of his war-time instincts (his "dissembling") in order to reclaim his home and family.

Among the beautiful and significant illustrated books and other works that comprise our latest printed catalogue, there is a four-page letter with a drawing that was sent by a young soldier to an eight-year-old girl from western Massachusetts. The letter was sent in response to a care package that Agnes Isabelle Munson sent through her church in South Deerfield. Charles Kauffman, a soldier with the 2nd Heavy Artillery, 112th Pennsylvania Regiment, reveals in this letter that he had been serving in the Union army since the age of fifteen. And although Kauffman assures his reader that he was "not sick or wonded" (sic), he does describe the war as cruel, and his depictions of captured confederate soldiers indicate that he had grown up tremendously during his two-year enlistment.

When I spotted this letter at an antiques show over the summer, I did not immediately think of the siege of Troy, but because these works held such a prominent place in my literary background this may have been what compelled me to purchase it. This letter, written by a seventeen-year-old Union soldier just two months before the surrender at Appomatox, with its naive and strangely compelling drawing of a girl or young woman holding a rabbit, is nothing less than an act of rejoining society.
Posted by Phil Salmon at 10:54 AM